The Pacific Northwest’s StableUSD is scheduled for listing on Binance on February 5th. 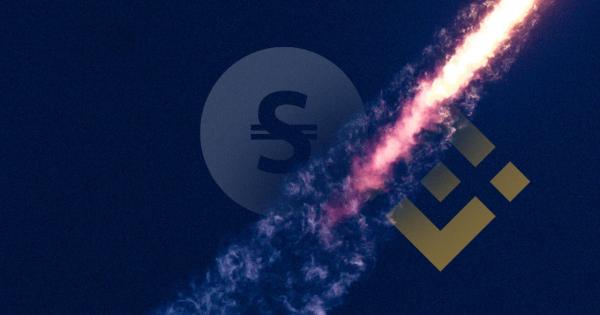 The Pacific Northwest’s StableUSD is scheduled for listing on Binance on Feb. 5th. Stably’s USDS is a cryptocurrency that aims to introduce additional transparency and reliability into a fiat-backed stablecoin.

Binance announced that it will list StableUSD (USDS) on Feb. 5th, 2019 at 19:00 PST, Feb. 6th 03:00 UTC, for BTC to USDS and BNB to USDS trading pairs. Traders can also deposit USDS prior to listing in preparation for trading.

In an interview with CryptoSlate, Stably’s CEO Kory Hoang expressed his enthusiasm in the scheduled listing:

“The Stably team is beyond excited to have the opportunity to list on Binance and show the world that the Seattle crypto scene is very much alive and still kicking!”

Meanwhile, Mahraan Qadir, VP of marketing at the company, elaborated that the team is not content with stopping at the Binance listing:

We’ll continue to pursue additional exchanges to list on, expand on trading pairs, and work with market makers to provide liquidity to the crypto market.”

What’s notable is what the team was able to accomplish with minimal capitalization. Unlike some projects which receive millions in funding and then go on to deliver lackluster results, it seems that Stably has been able to bootstrap its way to getting listed on the world’s largest exchange by trading volume:

“Just half a million dollar of seed capital and less than a year of development were all it took for this scrappy team of former Amazon engineers to build a world class stablecoin and list it on the largest cryptocurrency exchange on the planet.”

Stably’s success could be an outlier or could be indicative of a larger trend. Following the ICO-craze of 2017, more cautious investing and more capable teams may lead to a greater number of projects innovating in the space without the need for large amounts of outside investment.

That said, Stably still has a lot of work to do to become a relevant stablecoin.

For example, the circulating supply of StableUSD is still limited, potentially harming liquidity. Only recently has Stably’s market cap surpassed $6 million, in comparison to Tether’s market capitalization of over $2 billion.

Fortunately, listings on exchanges such as Bittrex and Binance will increase liquidity and encourage more users to deposit USD with the startup.

On the heels of the Binance listing, Stably is already looking for ways to expand its product offerings and innovate in the stablecoin space. Hoang elaborates:

“We have MAJOR plans for this year, including creating a global remittance network, developing a privacy meta-stablecoin, expanding across multiple protocols, and, of course, listing our tokens on a lot more exchanges.”

And Qadir expands on Kory’s mention of multiple protocols, talking about how Stably plans to offer an equivalent stablecoin on Stellar and EOS:

“Stably plans to exist on several blockchain protocols. We are already live on Ethereum, and plan to expand to other protocols including Stellar and EOS.”

Yet, even with Hoang’s optimism, the stablecoin space is highly competitive. There are currently over fifteen visible stablecoin projects that are racing to usurp Tether’s (USDT) incumbent position; Many have forecasted USDT’s demise based on its questionable business practices, and these smaller stablecoin projects are likely looking to take advantage of a potential vacuum.

For now, Tether has remained the dominant stablecoin in the market, even if its market share is getting eroded by new entrants such as Circle’s USDC and Gemini’s GUSD.

Whether Stably can continue its momentum and solidify its position as a dominant stablecoin in the sector is still to be decided.