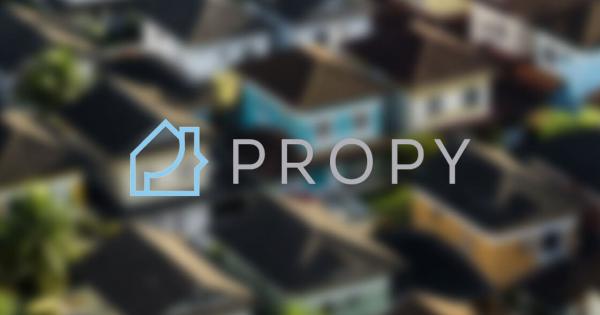 Photo by Breno Assis on Unsplash 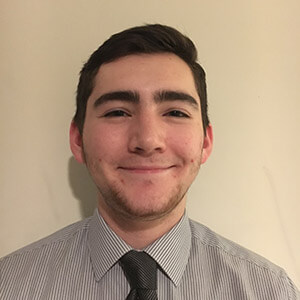 Buying a property is a tedious, costly venture that involves multiple intermediaries who all want a piece of the pie. Propy aims to digitize title deeds through the blockchain and save customers time and money.

The Propy system consists of three major components. The first is the Propy listing platform. This allows sellers to list properties and information and will enable buyers to search for properties that may interest them. The second is the transaction platform. It utilizes the blockchain and smart contracts to allow users to send paperwork, payments, and records.

The most important part of the system, however, is the Blockchain Registry. The core of the platform, the Registry stores land records on the blockchain by implementing smart contracts.

The goal of Propy is to create a peer-to-peer system where users can purchase properties entirely through the blockchain, and avoid the mire of paperwork and mediation. This is particularly useful for global real estate transactions, where differing national laws add confusion to the process.

According to Propy’s whitepaper:

Simplifying these transactions will only aid the already exploding global market.

On September 15th, 2016, Propy launched the listing platform. They began working on a transaction tool prototype in December of that year. On July 17th, 2017, they released a whitepaper detailing their platform, vision, and future goals.

They held an ICO that ran one month, beginning on August 15th, 2017. Their ICO was run on the ERC20 platform, with a 35 million token pool. Approximately 16 million tokens sold for $1 each, which was considered a massive success for the company.

Propy boasts a deep bench of team members and advisors.

At the helm is Natalia Karayaneva. An Oxford grad and software engineer, she has 12 years of real estate experience. The rest of the 11 member team includes developers, blockchain architects, cybersecurity experts, and others.

Advisors to the project are a formidable group, including:

The varied expertise of the team combined with the knowledge of successful advisors forms a solid group fit for Propy’s ambitions.

Propy aims to revolutionize the global real estate market, which has an estimated value of $217 trillion. The project, however, doesn’t seek to oust the current system, instead opting to work with it.

“The first one would be the current context, where governments recognize their legacy databases as the exclusive legal evidence of ownership. The second legislative environment would arise when progressive governments start recognizing the benefits of ownership transfers on blockchain as a more desirable alternative.”

As laws currently stand, Propy is unable to be entirely digital, as the blockchain is not yet a legally recognized form of property transfer.  To work within current laws, Propy plans to introduce a partially decentralized transaction platform shortly.

This platform would digitize all payments, and most paperwork is digitized, with the notable exception of the title deed. The deed would still be recorded on the blockchain registry, but it would not be legally enforceable through blockchain.

The process would begin with a buyer locating a property on the listing platform, then paying the reservation fee. The broker is notified, and the seller accepts the deposit. Both the buyer and seller then provide KYC/AML documentation.

Propy then generates the purchase and sale agreement and performs ownership verification through an escrow/title agent. The buyer and seller sign the digital document. At this point, the buyer can request a property inspection and appraisal, which Propy will outsource to a third party.

The money (fiat currency only) is transferred to an escrow account, and the payment form is generated. When the payment arrives, the payment processor partner will notify Propy, who will mark the payment smart contract as received.

The escrow agent then takes the documents to the recording office, where the ownership records are changed. Propy then issues its electronic title deed to the buyer. 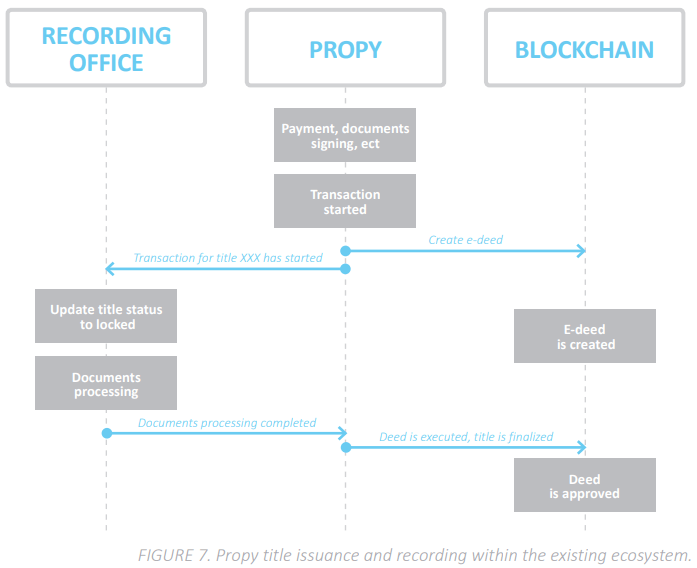 While the process still seems somewhat complicated, it’s important to note that all the documents besides the title deed are legally enforceable. So the only physical aspect of the transaction is the title deed itself. And this system works with current laws and would be entirely admissible today.

If title deed transfers through the blockchain become legally enforceable, then the process of real estate transaction would be vastly simplified.  In the long-term, Propy aims to release an entirely decentralized peer-to-peer transaction platform that accepts fiat or crypto payments.

On this platform, a prospective buyer would find a suitable property, then submit an offer via a smart contract to the seller. After the seller digitally signs it, intermediaries would complete their tasks, such as property inspection and other conditions provided by the buyer.

With legally-binding blockchain property transfers, buying and selling become entirely digital, and most intermediaries are removed.

However, Propy’s final goal is even more ambitious:

While the Propy platform is the framework of the system, Propy tokens power the system.

The total token supply is 100 million. 16 million were sold at ICO, with 19 million unsold tokens locked-up until September 15th, 2018. 35 million tokens are dedicated to the Network Growth Pool. 15 million are in a one-year lockup, after which they will be donated to independent non-profit foundations.

The final 15 million tokens will remain in the company’s wallet.

The Network Growth Pool is what will be used to attract users and properties. For transparency, the wallets containing the Pool are publicly available for audits.

To attract individual users, the NGP will reward users with Propy tokens for undertaking specific actions. This includes joining the platform, checking in at a property, sharing a listing online, etc. These actions will encourage the use of the Propy platform.

Additionally, title “miners” will be rewarded with tokens. These individuals are title agents, lawyers, and notaries who will digitize public land records and upload them to the Propy Registry.

Governments will also be incentivized to use the platform. Governments that integrate their national registries with the Propy Registry will receive Propy tokens relative to the total number of transactions they integrate for the year. Software companies, legal entities, and other companies could assist with integration for a share of the rewards.

However, the fees don’t solely benefit the Propy company. They receive 1/3 of the fees, while the other 2/3 are distributed back into the Network Growth Pool.

The Network Growth Pool and fee system produce incentives for users while providing a barrier to transactions which prevents spam attacks. This system helps to grow the Propy network in a stable, organic manner.

Unlike many other coins, Propy is far from vaporware. In fact, they have already completed their first property transaction through the platform.

In September 2017, Michael Arrington purchased an apartment in Ukraine for $60,000 from Ukrainian developer Mark Ginsburg. The deal took place through a partnership with the Ukrainian government.

The transaction itself occurred similarly to Propy’s current property transaction model. So the entire deal was digitized except for the title deed signing. Arrington even paid for the apartment with Ethereum.

While not legally binding, the deed was still recorded on the Propy Registry. Additionally, the blockchain hash and a QR code that contain the Propy Deed smart contract address were listed on the physical deed itself.

This ground-breaking property exchange lends legitimacy to Propy’s platform and demonstrates just how beneficial blockchain technology can be.

As far as I can tell this is first time, or one of the first times, a real asset other than a crypto currency had transferred on blockchain

And this isn’t Propy’s only government partnership. In January 2018, Propy partnered with the government of Vermont. In March, a real estate transaction occurred and was listed on the Propy Registry. While the deal did not utilize the Propy transaction platform in this instance, the Propy Deed smart contract address was again listed on the physical title deed.

Bringing blockchain into real estate will revolutionize the market. The Propy platform will provide transparency and efficiency in global property transactions while saving customers money and time.

Propy has set its sights on a massive global market and provides a real solution to a significant problem. While Propy has the ambitious goal of becoming the official registry of governments, so far the team has proven up to the task.

The strong team and advisors have worked quickly to secure important partnerships with various governments. One of the biggest strengths of the project is its compliance with the law, which helps legitimize the platform.

However, the most impressive accomplishment of the project is the property transaction in Ukraine. This transfer demonstrated a real-world application for the Propy platform and demonstrated how seamlessly the platform digitizes payments and paperwork.

The transaction also had significant ramifications for crypto and blockchain as a whole. It was potentially the first time an asset besides cryptocurrency was transferred through the blockchain. Additionally, it demonstrated how a cryptocurrency (in this case Ethereum) could be easily used send payments across borders in exchange for real assets.

The Propy platform has also explained how it will use the platform’s token to legitimize property transactions and incentivize users.

Propy is committing to a massive undertaking. Their goals and vision are very ambitious. However the team is currently exceeding expectations, and they are well on their way to making blockchain property transactions a reality.