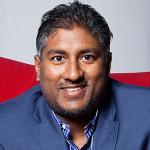 Vinny Lingham is a South African Internet entrepreneur who is the co-founder & CEO of Civic – an identity protection and management startup. He was also previously the founder and CEO of Gyft (acquired by First Data Corporation in 2014 for over $50m) & Yola, Inc.

He is also the co-founder of SiliconCape, an NGO based in South Africa that aims to turn Cape Town into a technology hub. Lingham was also previously the founder and CEO of the global technology firm incuBeta and its subsidiary Clicks2Customers.