Parity would work closely with Berkeley’s blockchain community on education and proficiency in blockchain and Substrate. 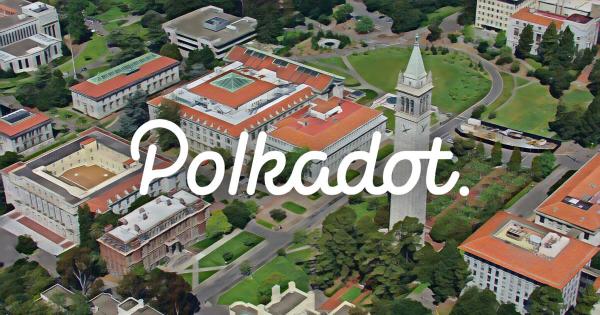 Parity would work closely with Berkeley’s blockchain community on education and proficiency in blockchain and Substrate.

Today, the University of California, Berkeley ‘Blockchain Xcelerator,’ and Parity Technologies announced a collaboration in the development of the University’s blockchain curriculum, they said in a release to CryptoSlate.

One of the top schools in the US, UC Berkeley is known for its computer science, social science, and engineering majors. Parity, on the other hand, is one of the main developers and code maintainers of the high-speed blockchain networks Polkadot and Kusama, apart from their work on several Ethereum-related tools.

The move sees the inclusion of Parity’s Substrate blockchain-building framework as an educational tool, and to work together to raise the overall awareness of next-generation blockchain technologies in order to promote adoption among students and the community at UC Berkeley.

Parity Technologies will work closely with the Berkeley Blockchain Xcelerator, advising students and entrepreneurs with the goal of launching high-value blockchain startups in general and in the Polkadot and Web 3.0 ecosystem.

For the 2020-21 academic year, Parity’s developer education team will engage with faculty, students, and the community studying blockchain technologies in their coursework. This includes involvement in curriculum preparation, project ideas, and resources to enrich the educational experience.

Jocelyn Weber, director at the UC Berkeley Sutardja Center for Entrepreneurship & Technology X-Labs in Berkeley Engineering and at the Berkeley Blockchain Xcelerator, said in a statement:

“Our work with Parity and other Polkadot ecosystem startups has demonstrated  the potential of this technology in educating our community.”

Weber added the team strives to expose their students to the tools and skills they would need to enter the blockchain space and immediately start making significant contributions.”

DeFi for the second time

The Berkeley Blockchain Xcelerator launched in January 2019 to support the creation of high-value blockchain startups from around the world and to become a leading source of blockchain educational programming on the UC Berkeley campus.

Since its launch, the Xcelerator has accelerated 45 blockchain companies, including most recently Acala which has received $7 million series A funding to provide a DeFi ecosystem on Polkadot and Stake Technologies which provides smart contract capabilities on Polkadot. Partnering with Blockchain at Berkeley, the Xcelerator is also delivering educational programming on next-generation protocols such as Polkadot.

Meanwhile, UC Berkeley’s students have a lot to look forward to. As a part of Berkeley’s blockchain coursework, Ethereum, Parity Technologies, and Polkadot co-founder Dr. Gavin Wood would be giving a lecture in March of 2021. You wouldn’t wanna bunk that class.