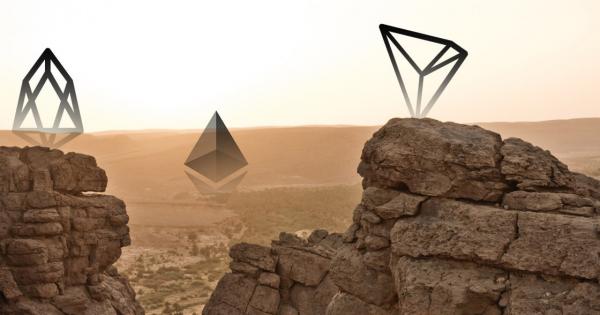 With Ethereum (ETH) retreating from all-time highs and settling between $100 and $150, some are suggesting the world’s second largest crypto is losing momentum. A recent report from Bloomberg showed that both EOS and Tron have surpassed the platform in popularity with both users and developers, putting its market share in danger.

Growing Competition for the Ethereum Network

Since its debut in 2015, Ethereum has been regarded as “the next big thing” in crypto. Hailed as the more savvy successor to Bitcoin as it catered to developers and tech companies, the platform has seen nothing but a meteoric rise until 2017.

However, according to a recent Bloomberg report, the network running the ether cryptocurrency seems to be losing its market share. The report noted that Ethereum’s growth spurt was due to the fact that it faced almost no competition for several years, allowing the protocol to acquire substantial market share overnight.

But, as other projects started popping up in recent years, it usurped Ethereum’s reign and brought much-needed competition into the space. Kyle Samani, co-founder of hedge fund Multicoin Capital Management in Austin, Texas said:

“The simple reality is that until the last six-to-nine months, there were no other options besides Ethereum. Now there are.”

Platforms such as TRON and EOS attracted many companies that were built on Ethereum’s protocol and proved to be worthy opponents to Vitalik Buterin’s network.

Travis Kling, the founder of the Los Angeles-based crypto hedge fund Ikigai, said that the migration to other networks could be a result of reduced demand for ETH. He explained that as Ethereum’s competitors gain traction, the overall value of Ethereum drops, affecting ether’s price.

This has also caused the platform’s market share to plummet—only 8 percent of DApps users were on the Ethereum network as of January, compared with 100 percent a year earlier, according to tracker DappRadar.

The data showed that EOS  and Tron accounted for 48 and 24 percent of active DApp users, respectively. Despite the two platform’s growing popularity, Ethereum still managed to stay ahead with 40 percent of the market share among smart contract platforms.

Patrick Barile, the chief operating officer of DappRadar, said that the reason EOS, Tron, and other similar platforms got so much adoption is that they offer considerably better speed. Therefore, DApps built on faster platforms allow for a much better user experience. Moreover, some applications, like gambling, simply require faster transaction speeds.

However, despite heavy competition and a tough year ahead, many analysts believe that Ethereum is still going strong. Hudson Jameson, a member of the Ethereum Foundation, said that the community built around the platform is what has helped it and what will help it going on in spite of market conditions.

Developers have been working on improving the network’s throughput and transaction speed for months, which should lead to major improvements being launched in the following months. Furthermore, Ethereum enthusiasts are optimistic that the move to proof-of-stake will produce tangible improvements in speed.