Justin Sun and Vitalik Buterin clash once again over Twitter. 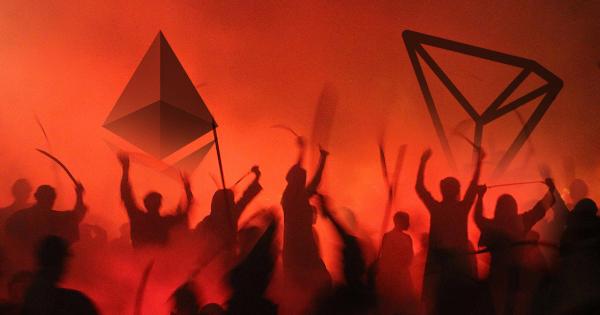 Photo by Hasan Almasi on Unsplash

Justin Sun and Vitalik Buterin clash once again over Twitter. The two juggernauts are back to unleashing criticisms against each other’s platforms as Ethereum and TRON battle for market dominance.

On Twitter today, Justin Sun once again touted the merits of the TRON platform. In a tweet, he linked an article where Vitalik Buterin stated:

“…basically the next wave of crypto adoption is not going to be built on hype because the hype is basically already come. It has to come from really useful applications and things delivering value to people.”

In response to Buterin’s comment, Justin Sun tweeted the following:

The comments are consistent with Justin Sun’s usual promotion of TRON, having previously elucidated multiple times that TRON would cause the next “bull run.”

In response to Sun’s underhanded comment, Buterin fired back by saying that anyone who uses their own ticker symbol in a tweet is “basically a self-identified shill and not worth listening to.”

Sun sarcastically responded by saying that Buterin can criticize his use of the TRX ticker after the Ethereum platform matches TRON’s alleged “2 million transactions per second” throughput:

We can talk about the dollar sign after the day #ETH reaches 2 million Txs per day, which I think will never happen. ?#TRON https://t.co/MnnSFBPtZx

The tense relationship between Vitalik Buterin and Justin Sun stretches back to the origins of TRON. In the past, Buterin has extensively criticized Sun’s blatant plagiarism in TRON’s whitepaper, taking excerpts directly from IPFS and FileCoin, and then using code without attribution.

In an underhanded comment from Buterin (referencing the plagiarism), he remarked that Justin Sun could have more easily stolen from these projects by using the hotkeys “Ctrl + C/Ctrl + V” to improve his plagiarism efficiency.

Buterin even went so far as to call out Justin Sun’s plagiarism in a meta April Fool’s joke. In a light-hearted Ethereum Improvement Proposal (the process which the Ethereum developer community decides on how to make software updates) Vitalik Buterin plagiarized 20 percent of the proposal from the TRON website, paying tribute to the white paper and code copying incidents.

However, Justin Sun is far from defenseless. He did not let the criticisms slide, and increased his own attacks on Ethereum, saying that in a bear market developers should migrate to TRON:

Perhaps Buterin is right to say that Sun is outright shilling TRON for his own gain, implying that those who extol “1000x” gains encourage “people to act more like Justin Sun.”

“If you spin things this way [saying that the market will experience 1000x price increases] you’re *incentivizing* people to act more like Justin Sun.”

Or, alternatively, maybe Justin Sun is justified in his promotion of TRON. Assuming his claims are accurate, TRON might be that much better than Ethereum. Perhaps Justin Sun’s TRON will bid “goodbye” to Ethereum as TRX surpasses ETH.

Whatever the result, Justin Sun’s aggressive marketing of the TRON project does not sit well with Vitalik Buterin’s more reserved technology-first style of leadership. Given those circumstances, it seems unlikely that the two will ever reconcile their disagreements around the two competing platforms.

Mild-mannered Ethereum creator Vitalik Buterin appears to have undergone a metamorphosis from crypto-savant to crypto-savage over the last week, firing shots over Twitter at TRON’s Justin Sun and roasting long-time nemesis Craig Wright at the Deconomy international blockchain forum in Seoul. 3 min read

In an interview, Justin Sun, the Founder and CEO of TRON, discusses how the platform will implement Zcash’s zk-SNARKs cryptography in Q1 of 2019. 3 min read

TRON, one of the most popular dApp platforms, is establishing a blockchain game fund: TRON Arcade. 2 min read

Ethereum’s new Serenity update, which will enable the network to transition from a Proof-of-Work (PoW) to a Proof-of-Stake (PoS) consensus model, has been generating a lot of hype in 2018. 2 min read