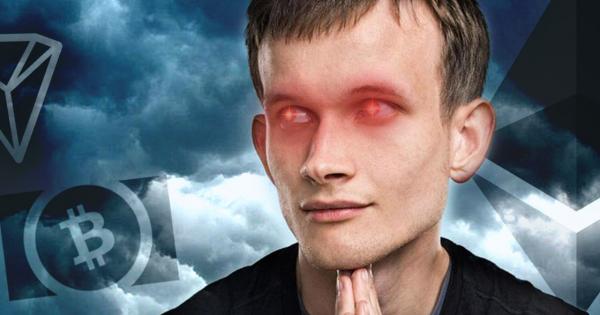 Buterin’s all-out offensive began on April Fools, with the Russian programmer publishing a facetious post outlining the launch of an “Ethereum Stablecoin” in a buzzword-dense announcement targeting the current state of the ICO ecosystem.

A tweet from Buterin in the ensuing discussion — in which the Ethereum creator stated that a hard cap on Ethereum may not be such a bad idea — gently roasted content distribution blockchain platform TRON:

And by the way, most people missed one of the more well-hidden jokes in https://t.co/2TE0MERuSM: ~20% of the blogpost was plagiarized from https://t.co/Lbbf1wdVFf

While Buterin’s friendly jab at TRON is based on genuine evidence of plagiarism in the TRON white paper, TRON founder Justin Sun was unimpressed, taking to Twitter later in the week to post a lengthy infographic comparison between Ethereum and his platform— which, it should be noted, has still not yet achieved a mainnet release.

Buterin’s riposte to Sun’s hubris was swift and merciless, adding an additional advantage that the TRON project holds over Ethereum:

Highlighting the TRON’s copypasting skills may be hilarious, but it’s also entirely accurate — large sections of the Tron white paper appears to have drawn heavily from other blockchain project white papers such as Filecoin and IPFC entirely without citation, a fact that Sun conveniently sidestepped when called out on the plagiarism earlier this year.

Buterin’s reply to Sun’s comparison between Ethereum and TRON appeared to cause the TRON founder to remember that his platform currently runs on the Ethereum network as an ERC20 token. Soon after the exchange, Sun took to Twitter to prostrate himself before Ethereum overlord Buterin with the following tweet:

Thanks for the reply of @VitalikButerin . #TRON benefits a lot from #eth and #eth inspires us to make a better decentralized platform. If you are more familiar with #TRON you will know we have launched testnet (Mainnet 5/31)and are more than white paper writing. #TRX $TRX https://t.co/GVHqWRTeNP

Buterin on the Warpath

Justin Sun is not the only blockchain persona to incur the wrath of Vitalik, however. The Ethereum founder tweeted an ominous statement during the Deconomy conference earlier this week during a segment that featured talks from Roger Ver and long-time arch-nemesis and Bitcoin Cash proponent Craig Wright:

I'm going to live tweet comments on the "Bitcoin, Controversy over Principle" section of Deconomy for fun.

Over the course of a 60-tweet long rampage, Buterin systematically shredded Wright’s presentation, addressing each of Wright’s erroneous claims regarding blockchain technology and Bitcoin.

For the uninitiated, Wright and Buterin have crossed swords before, with Buterin previously calling out “Fake Satoshi” on his claim of being the mind behind the Satoshi Nakamoto pseudonym, going so far as to attack him directly on twitter:

@ProfFaustus stop being a fraud, please. You're not Satoshi. That said, your tweets make a great living argument for the #no280 movement.

Buterin’s rage reached critical levels at the end of the Deconomy presentation, culminating in the Ethereum mastermind taking the fight IRL during the question and answer section with the following confrontation:

Wright, however, appears to be unperturbed by Buterin’s criticism, and has taken to Twitter to reply to Buterin’s furious roast:

He is a twig.. must remember to be gentle next time …. https://t.co/cGVdLV9OlT

At this point, a physical confrontation between the two appears all but inevitable. The outcome of a cage match between Buterin and Wright is difficult to predict. Buterin, at 24 years old with an estimated height of 186 cm and a body weight of 68 kg, holds an age advantage over Wright, at 47.

Wright holds a significant weight advantage over Buterin and could benefit in a physical confrontation from his history as a convicted criminal. It’s possible that Buterin’s skeletal composition, however, could provide him with passive unholy AoE that would counteract Wright’s strong evasion techniques.

The upcoming EDCON 2018 conference could be an ideal venue for the match and presents a strong opportunity for Justin Sun to demonstrate the media distribution capacity of the TRON platform in a live broadcast.

Jokes aside, Buterin’s moves in the blockchain ecosystem over the last week show that the Ethereum founder is intent on making a serious impact on the world through distributed ledger technology and is tiring of the speculative mania that is currently playing havoc with the cryptocurrency market.

The cryptocurrency ecosystem may be the target of scams, Ponzi schemes, and other fraudulent endeavors, but the presence of technically adept individuals such as Buterin ensures that it’s not possible for avaricious entrepreneurs to fool all of the investors, all of the time.