Ethereum is seeing an outstanding rally against Bitcoin—fueled by strong network fundamentals—while the overall altcoin market sees some relief after months of bleeding. 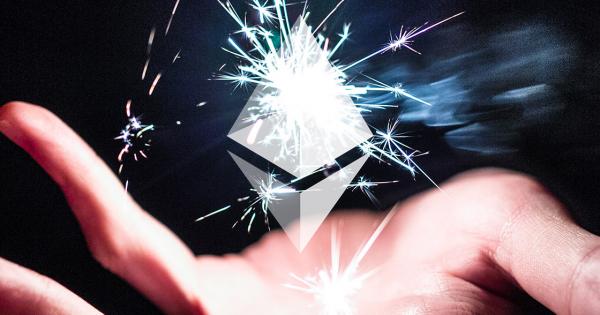 Ethereum is seeing an outstanding rally against Bitcoin—fueled by strong network fundamentals—while the overall altcoin market sees some relief after months of bleeding.

Altcoins in the green

Altcoins are finally getting some relief after getting pummeled, in Bitcoin terms, since the beginning of the year. BTC dominance started the year at 57.8 percent and hit a high of 73.5 percent on Sept. 6, highlighting the magnitude of the satoshi losses.

Altcoins, on average, lost 62.4 percent of their value against BTC—meaning the vast majority of these coins have been losing investments versus a pure Bitcoin portfolio. Two exceptions include Chainlink and Binance Coin.

Volume is also up substantially, an indicator that validates the impulse. Volumes for Ethereum are up 56.2 percent over the 7-day average, with $10.3 billion in ETH traded over the last 24-hours, according to CoinMarketCap data.

The Ethereum network has seen a number of metrics grow substantially since its last rally, as pointed out by crypto investor Spencer Noon.

First, ETH is overtaking BTC in daily transaction fees, suggesting strong demand for the network. Transactions with high fees attached are indicative of meaningful economic activity taking place on the chain, especially when compared to blockchains with low-fee or fee free transactions (making these protocols susceptible to spam).

Another promising indicator is daily gas usage. The metric is at an all-time high, suggesting that the amount of computation conducted on the network and its per unit value is also increasing.

Year-to-date loans originated on DeFi protocols on the Ethereum network are also showing robust numbers. Since the beginning of the year, a notable $419 million in loans have originated on decentralized finance protocols which use Ether and other ERC-20s as collateral.

Origination dollar volume peaked in July, followed by a slump in August. If this rally continues then October may see an uptick in origination volume. Outside of network statistics, Ethereum has seen a number of news events in the last month that support a rally.

Hyperledger included Ethereum as its first supported public blockchain, Santander recently issued a $20 million bond on the network, BitPay is bringing ETH payments to the mainstream, and demand from the Muslim world may increase after scholars deemed the cryptocurrency halal.

It’s impossible to predict where the markets are going. Nevertheless, there seems to be a lot of reasons to be bullish on Ethereum.