Over 34 million EOS worth $167 million was permanently removed from circulation. 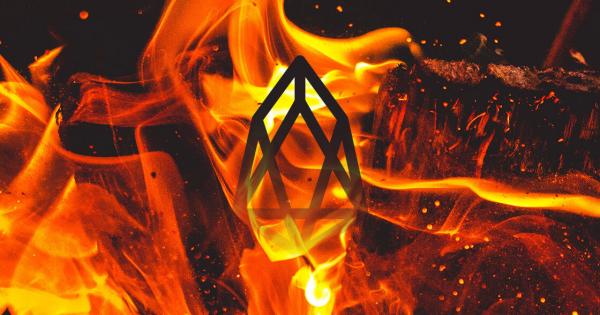 Over 34 million EOS worth $167 million was permanently removed from circulation. The move is part of an initiative to drastically lower the inflation rate on the protocol from 5 to 1 percent.

On July 31, 2018, 15 or more of EOS’s 21 block producers passed an initiative to burn $167 million EOS sitting idle in the platform’s savings account.

The account was created when EOS was launched in January of 2018. However, the account has sat idle for eight months, accumulating funds, without any plans for allocations. Approximately 3.6 million EOS ($17 million) is minted and sent to the eosio.savings account each month. And, the figure is growing exponentially as a result of compounding inflation.

The EOS blockchain has a 5 percent annual inflation rate. 4 percent of this inflation is allocated to the eosio.savings account while 1 percent is distributed to block producers.

There is currently an initiative—with overwhelming support—to eliminate the 4 percent inflation going to the eosio.savings account while retaining 1 percent inflation for block producers. The poll closes at the end of May.

“This large quantity of accumulated tokens has now become excessive and if we continue to allow it to keep growing, it will eventually become an attack vector for the network,” stated the proposal.

On May 7th, the initiative was executed and 34,171,037 EOS was permanently removed from circulation. However, the burning did not affect future contributions to the savings account and inflation disbursements will continue until the vote reducing inflation is passed.

The reduction in potential circulating supply is a boon for EOS token holders. By the law of supply and demand, each remaining token now represents a greater proportion of the network’s value.

EOS likely to drop inflation rate from 5% to 1%