Bitcoin’s upcoming 2020 halving, which would halve block rewards from BTC mining, could allegedly be the event that pushes the coin to new highs. 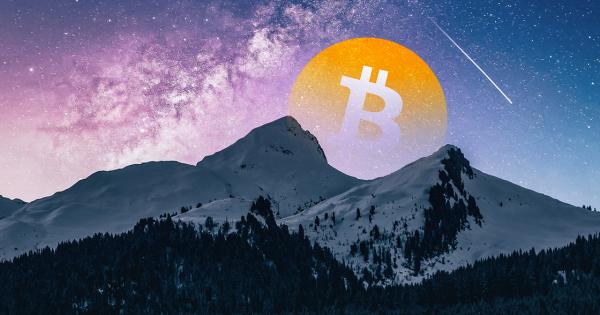 Bitcoin’s upcoming 2020 halving, which would halve block rewards from BTC mining, could allegedly be the event that pushes the coin to new highs. According to one crypto quant, the halving could push bitcoin’s price to $55,000.

Following the cryptocurrency boom of 2017 and bust of 2018, industry experts and analysts have raced to predict what would be the catalyst for the next sustained bull market (with mixed success).

According to PlanB, a cryptocurrency quant, the Bitcoin block reward ‘reduction event,’ scheduled to occur in May 2020, has the potential to bring bitcoin’s price as high as $55,000. The researcher cited a scarcity valuation model and explained that he modeled bitcoin’s future valuation through a stock-to-flow ratio (SF).

Currently, on average, blocks are found every 10 minutes with a reward of 12.5 BTC. This means that each day 1,800 new bitcoins, worth $9 million at $5,000 per coin, are introduced into circulation.

Every four years a halving occurs that cuts the reward in half, with the latest halving scheduled to reduce the reward from 12.5 BTC to 6.25 BTC. This process was intentionally built into Bitcoin to keep inflation of the cryptocurrency in check while creating scarcity around the asset.

The valuation used in the analyst’s bitcoin price prediction looked at the “above-ground,” or in circulation, stock of different assets relative to new supply (inflation). According to the report, bitcoin is a “very scarce” asset in terms of its stock-to-flow ratio.

The report found that Bitcoin currently has an SF of 25, which means it would take 25 years of production to reach Bitcoin’s current circulating supply of 17.5 million coins. However, since the supply of bitcoin is fixed at 21 million there are only 3.5 million BTC left to be mined. In the year 2022, the SF of Bitcoin is expected to reach 50—a value much closer to gold.

This puts bitcoin in the monetary goods category, alongside silver and gold. Gold currently has the highest SF at 62, while silver is second with an SF of 22.

The purpose of establishing these sums is to point out that there is a linear relationship between SF and the market valuation of an asset. Therefore, the analyst asserts the halving event will inevitably increase the SF ratio, putting bitcoin’s market capitalization as high as $1 trillion by 2022.

Such a high market cap would mean that a single Bitcoin would be worth around $55,000, the report found. And while the predicted price might appear high compared to its current value, it would be in line with market trends according to the analyst.

The report notes that the funds needed for a $1 trillion Bitcoin market cap would come from a variety of sources, including gold and silver, billionaires hedging against quantitative easing, and institutional investors wanting to switch to an asset that has been the “best performer in the past 10 years.”

Furthermore, countries with restrictive governments such as Venezuela and Iran, as well as countries with negative interest rates such as Japan, will also be responsible for some of the money predicted to pour into Bitcoin, the report suggested.