Bitcoin smoked Amazon and Apple in the last decade, can it do the same in the 2020s?

Just ten years ago, Bitcoin was entirely irrelevant on a global scale, used by less than a few dozen individuals, who were transacting coins worth zilch on the open market in a peer-to-peer fashion. Sure, the idea of decentralized and digital cash was worth something, but there was little to zero adoption months after pseudonymous coder Satoshi Nakamoto published the first iteration of Bitcoin.

But times have changed. Dramatically. What was digital money used by the fringe—those that wanted to bypass the pitfalls of traditional payment solutions and bet on the future of the world—is now a mainstream financial and technological phenomenon. Now, Bitcoin has found itself frequenting the headlines of mainstream media outlets, becoming a part of the world’s vernacular, and referenced by many a corporation.

Long story short, Bitcoin has done well over its 11 years of existence—so well that a simple analysis has revealed that the cryptocurrency is the best-performing mainstream investment of the past decade.

Though this is an undisputed fact, the question remains: Will Bitcoin continue to outperform traditional equities in the coming decade, then the one after that, and so on? According to many investors and researchers, for sure.

What’s the most profitable asset of the 2010s?

Howmuch.net recently released an article entitled “The Investment of the Decade: Bitcoin vs. World’s Megacorps,” in which the money and business-focused analytics media site wrote that investing $100 into Bitcoin ten years ago would have net investors with $9.2 million worth of coins today—a price gain over 9,200,000% over the span of a mere decade.

OFFICIAL: Bitcoin is the most profitable asset in this decade! 🔥 pic.twitter.com/n3fH5aVmVr

For some perspective, Amazon, one of the world’s most valuable companies, only (relatively speaking) provided its investors with a 3,300% return in the past decade. As HowMuch wrote:

“Even with Bitcoin’s latest price implosion, the cryptocurrency has still created an astonishing 9,150,088% return. Other companies like Amazon (+3,156%) and Apple (+2,345%) are still impressive, but nothing truly compares to the king of the crypto world.”

This makes Bitcoin the best mainstream, non-derivative investment in the past decade. Easily.

This strength in the Bitcoin price has led Balaji Srinivasan, the co-founder of Earn along with CoinCenter and the former CTO of Coinbase, to claim that Bitcoin was the biggest unicorn of the past decade, not Snapchat, Uber, or Airbnb. Srinivasan said:

“As the decade ends, the biggest unicorn of the 2010s wasn’t Uber, Airbnb, or Snap. It was Bitcoin.”

While nine million percent is obviously a ludicrous return, there are many analysts who claim that the cryptocurrency’s breathtaking rally is only starting.

Per previous reports from CryptoSlate, prominent commodities trader Peter Brandt recently shared a post from his private blog, in it claiming that he believes that the price of the leading cryptocurrency “is indeed going to $100,000,” citing the “overall classical chart context.”

As to what this “context” is, Brandt has claimed in the past that with Bitcoin already seeing three macro parabolic phases, a fourth will eventually follow, which could bring the cryptocurrency to six digits in the coming years. 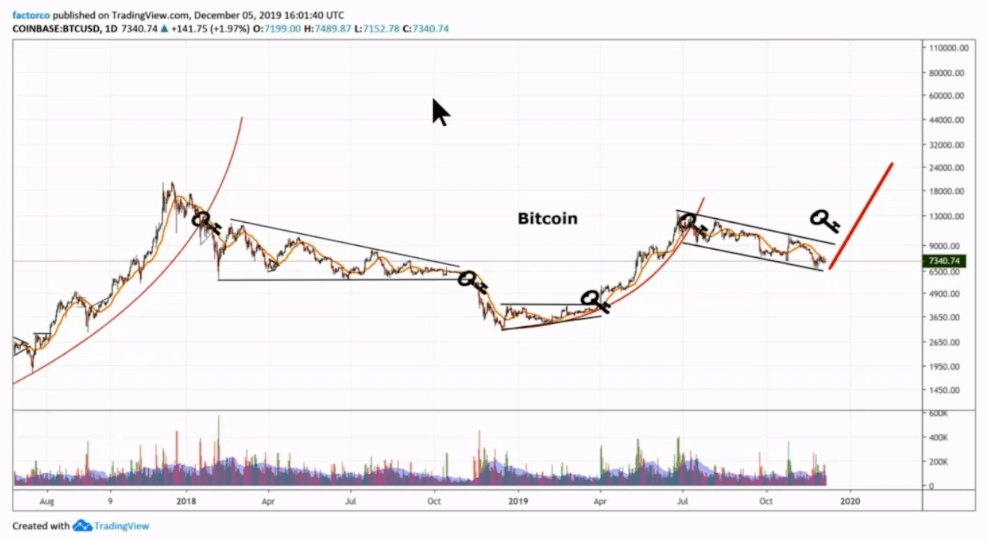 The fundamentals back this. Just last week, one of the world’s most prominent banks, Deutsche Bank revealed in a report that it believes that cryptocurrencies, Bitcoin included, have a good possibility of replacing fiat currencies in the coming decade due to potential risk factors in central banks:

“That this current fiat system has survived so long has required a fortuitous set of global forces across multiple decades that have created sizeable natural offsetting disinflationary forces.”

There’s also the sentiment that Bitcoin’s block reward (halving) events will spark massive price appreciation, with a price model relating the cryptocurrency’s scarcity to its market capitalization, finding that by 2024, BTC’s fair valuation per coin will be well past $250,000.

There’s a running meme that the cryptocurrency community is filled to the brim with millennials and generation Z—people born after 1981.