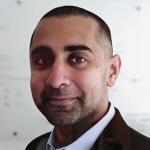 Co-Founder and Board Member Coin Center

Balaji S. Srinivasan is the former CTO of Coinbase and co-founder of Counsyl (acquired by Myriad), Earn.com (acquired by Coinbase), Teleport (acquired by Topia), and Coin Center.

Dr. Srinivasan was previously CEO at Earn.com, which was acquired by Coinbase. Before taking the CEO role at Earn.com, he was a General Partner at Andreessen Horowitz. Prior to joining Andreessen Horowitz, he was the co-founder and CTO of Counsyl, where he won a Wall Street Journal Innovation Award for Medicine and was named to the MIT TR35.

Dr. Srinivasan holds a BS, MS, and P.h.D in Electrical Engineering and an MS in Chemical Engineering from Stanford University. He also teaches the occasional class at Stanford, including an online MOOC in 2013 which reached 250,000+ students worldwide.

Bitcoin smoked Amazon and Apple in the last decade, can it do the same in the 2020s?