There’s a running meme that the cryptocurrency community is filled to the brim with millennials and generation Z—people born after 1981. 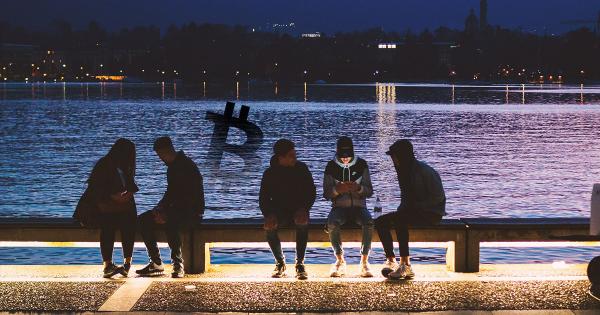 There’s a running meme that the cryptocurrency community is filled to the brim with millennials and generation Z—people born after 1981. Apparently, the anecdote is more than just a meme, it’s fact.

New data from Charles Schwab, one of the largest retail brokerage firms in the United States, has indicated that the Grayscale Bitcoin Trust, which trades under the ticker GBTC on over-the-counter markets, is one of the most popular equity holdings amongst millennials. This statistic comes against the headwind of the 50 percent downturn that the Bitcoin price has seen over the past five months.

Bitcoin more popular than Disney, Netflix, and Microsoft amongst millennials

On Dec. 4, Charles Schwab released a report regarding its clientele’s favorite investments as of the end of the third quarter of Q3.

Under the column for millennials, those born after 1981 and before 1996, it was noted that 1.84 percent of this demographic’s collective net worth was allocated to Grayscale’s Bitcoin Trust, making the BTC-linked investment vehicle more popular than Berkshire Hathaway, Walt Disney, Netflix, Microsoft, and Alibaba Group. This made GBTC the fifth most popular investment among millennials, falling short of Facebook’s 3.03 percent, Tesla’s 3.22 percent, Apple’s 6.18 percent, and Amazon’s 7.87 percent. 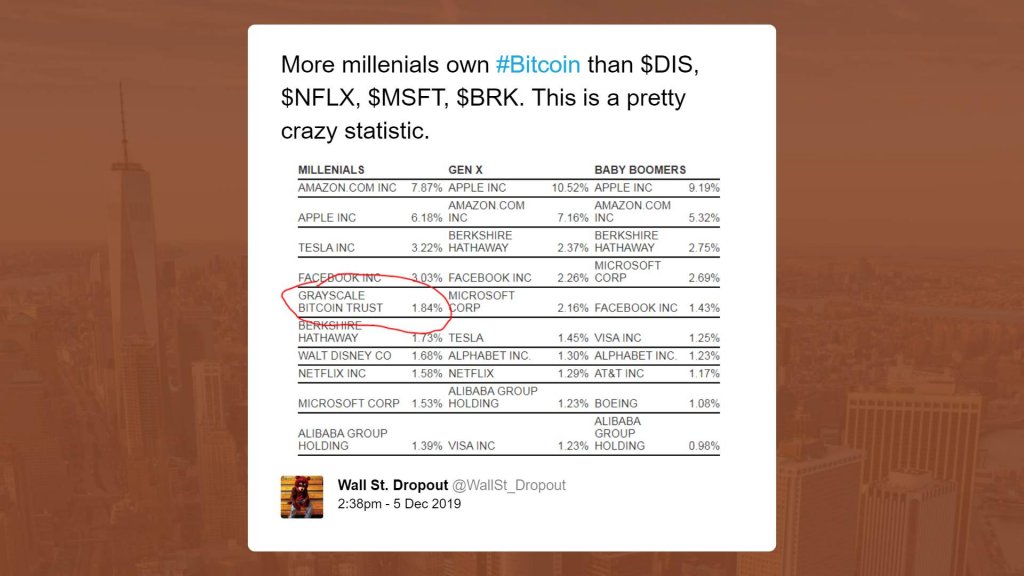 Sure, 1.84 percent isn’t “mass adoption” per se, though many in the cryptocurrency community have taken this statistic in stride. Mike Dudas, CEO of industry outlet The Block, wrote that this statistic is the “clearest sign to me that there is retail demand for people to own bitcoin via traditional investment accounts.”

While GBTC being millennials’ fifth-largest holding on Charles Schwab is already a positive stat in and of itself, the Trust and other investments affiliated with Bitcoin are likely only going to increase from here.

An early-2019 survey published by industry venture fund Blockchain Capital revealed that there is an overwhelming level of interest for Bitcoin amongst the millennial population in the States.

The poll, which 2,029 American adults responded to, revealed that 59 percent of those aged 18-34 “strongly” or “somewhat” agree that “Bitcoin is a positive innovation in financial technology,” while 42 percent of the same demographic indicated that they intend to purchase BTC within the next five years.

This statistic makes sense. Partner of Bitcoin fund Adaptive Capital Willy Woo recently shared the chart below, which shows that while millennials make up a rapidly increasing portion of the adult population, they own effectively none of America’s wealth. In fact, at just over 25 percent of the U.S. population, millennials own 3 percent of America’s wealth. Woo said:

“For the sake of economic equality, it’s our duty as Gen-Xers and Millennials to take wealth from the Boomers. Gratitude to Peter Schiff, he’s such an ally.”

Being an asymmetric investment that analysts argue has a strong risk-return profile, Bitcoin gives millennials a chance to begin to encroach on the wealth share of other generations.

Marty Bent, a popular Bitcoin podcaster, commented on this, responding to the Charles Schwab statistic by writing that “we’re mad as hell and we’re going to do something about it,” referencing the idea that millennials will take over the largely baby boomer-run fiat system with cryptocurrencies.

That’s not to mention that Coldwell Banker Global Luxury estimated earlier in 2019 that $68 trillion will be passed down from boomers to millennials in the coming decades. In fact, Coldwell’s report suggested by 2030, millennials will hold five times as much wealth as the demographic holds today.

With investing millennials already showing a preference towards Bitcoin, it shouldn’t be too much of a stretch of the imagination to guess what happens when this group inherits some wealth.

Blockchain Capital, founded in 2013, is one of the oldest and most active venture investors in the blockchain industry and has financed 75+ companies and projects since its inception. Learn More