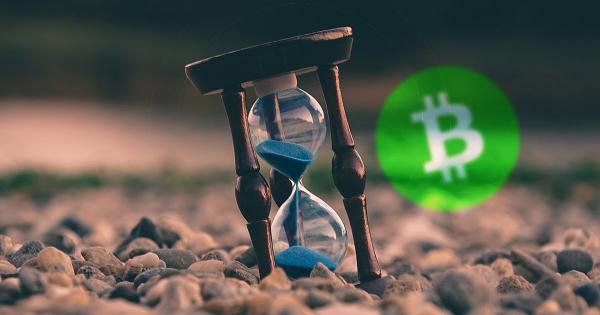 Today at 12:19 p.m (UTC), the leading fork of the BTC chain saw its own block reward reduction, with the number of coins mined in each block falling from 12.5 to 6.25, resulting in a 50% reduction in the inflation of the leading altcoin, hence the moniker of “halving.”

Interestingly, the price of Bitcoin Cash has been stagnant despite the event, trading in a tight $260-270 range for the past three hours, failing to react to one of the most important events of its lifetime.

What did react, however, were miners.

After block 630,000 was mined at 12:19 p.m, which activated the halving, I observed that there was a long gap in blocks, of 109 minutes — over 1,000 percent higher than the 10-minute average imposed by a block difficulty adjustment that adjusts how difficult it is for miners to process blocks.

So, uh, there have been no blocks mined in the 94 minutes since Bitcoin Cash saw its block reward halving at height 630,000.

Bitcoin, on the other hand, continues to register block after block. pic.twitter.com/p3CXjblEcv

This is seemingly due to BCH miners needing to adjust to the reduced profits.

Importantly, transactions have started to go through since the 100-minute block time, with Bitcoin.com’s blockchain explorer registering a series of blocks in rapid succession. In fact, six blocks were mined in a 40-minute, suggesting that miners are adjusting to the new mining era for BCH.

But it’s not out of the woods just yet.

A 2019 report from cryptocurrency data news site LongHash indicates that in the wake of its first official halving, BCH will “take a security hit.”

The decline in block rewards, LongHash wrote, “should lead to a decline in security because the decreased value of the block reward lowers the incentive for miners to use their hashing power to secure the network.”

The halving of the altcoin’s issuance comes 35 days ahead of the halving for Bitcoin, slated to be a much bigger event. The reason why BCH is ahead of Bitcoin is that there were “initial problems with the BCH difficulty adjustment algorithm in 2017,” according to BitMEX Research.

Due to initial problems with the Bitcoin Cash difficulty adjustment algorithm in 2017, it got here a few weeks before BTC.

Just over 5,000 blocks to go until Bitcoin's third halving

As this halving has neared, the hype around the event has increased.

Preliminary Google Trends data released for the ongoing week of April 5th to 11th suggests the interest in the search term “Bitcoin halving” will rise to a new 12-month high once the week is finished. The granular data for the U.S. is even more dramatic, with Google predicting that Americans will be searching “Bitcoin halving” two times more this week than they did last week.

This is presumably in response to the effect analysts say the halving will have on Bitcoin’s price.

As reported by CryptoSlate previously, analyst PlanB found that Bitcoin’s market capitalization over time can be determined by an asset’s scarcity. The model, accurate to an R squared of 95 percent, predicts that BTC will have a fair value of $55,000 to $100,000 after the halving.