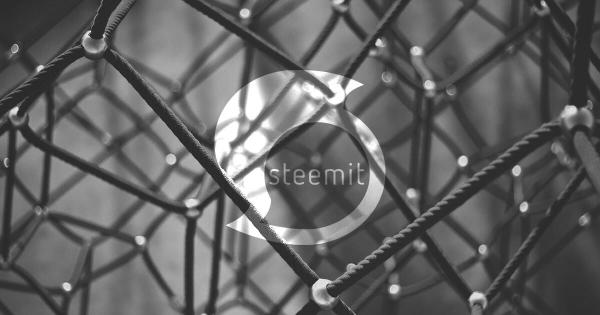 This comes close on the heels of TRON’s recent acquisition of Steemit, sparking an inquiry into whether or not one can accurately deem the blockchain as being decentralized due to this governance flaw.

The acquisition was aimed at bringing the DApps that have been built on the Steem blockchain underneath TRON’s umbrella, with Justin Sun announcing multiple different initiatives aimed at bridging TRX into the Steem ecosystem in a recent open letter to the blockchain’s community.

“We have so much to work to do to make Steemit.com the power that it really can be. And there are many ways we can get it there, from bridging TRX, TRC10’s and TRC20’s into Communities to marketing and growing Steemit.com.”

It now appears that the latest development in the Steem saga is that some major exchanges have essentially hijacked Steem’s Delegated Proof-of-Stake Consensus (DPOS) using depositors’ tokens.

Earlier today, news began spreading regarding some major exchanges using depositors’ tokens to cast votes on Steem’s DPOS blockchain, essentially taking over the blockchain using their clients’ tokens in what one user describes as a “hostile takeover.”

Vitalik Buterin, the Ethereum co-founder, spoke about this in a recent tweet, noting that this may be the first clear instance of a “de facto bribe attack on coin voting.”

“Apparently Steem DPOS got taken over by big exchanges voting with depositors’ funds. Can anyone confirm and/or provide details? Seems like the first big instance of a ‘de facto bribe attack’ on coin voting (the bribe being exchs giving hodlers convenience and taking their votes).” 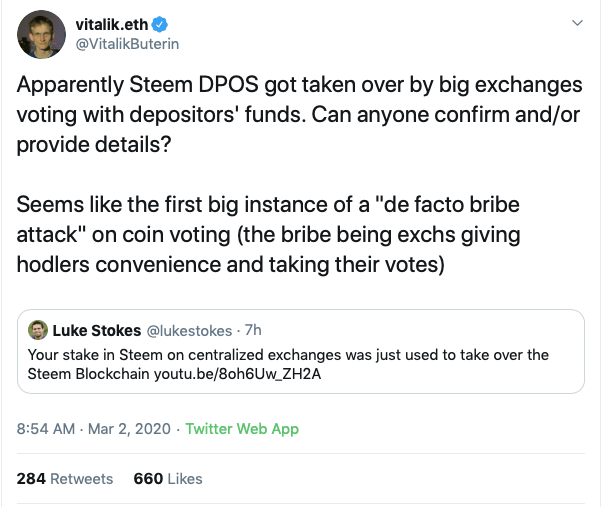 Bob Loukas, a well-known analyst and market commentator, chimed in regarding the topic, noting that individuals who hold their tokens on a centralized exchange are knowingly sacrificing their rights to vote on that blockchain.

“The depositor may have a ‘balance’ at the exchange, but do not have rights on that blockchain. They exchanged that right for a paper guarantee, all for the purpose of speculation.  If they had cared about the stake, they would have demanded that within their paper exchange.”

Investors who are passively engaged in the development of the blockchain may not be too upset by exchanges hijacking their votes, but it does elucidate that exchanges still remain a singular point of centralization within the markets that DPOS blockchains need to guard against.