Joseph Lubin, a co-founder of Ethereum and the head of ConsenSys, the biggest blockchain software company in the world, re-affirmed his initiative to bring more than a million developers into the ETH ecosystem at ETHDenver. 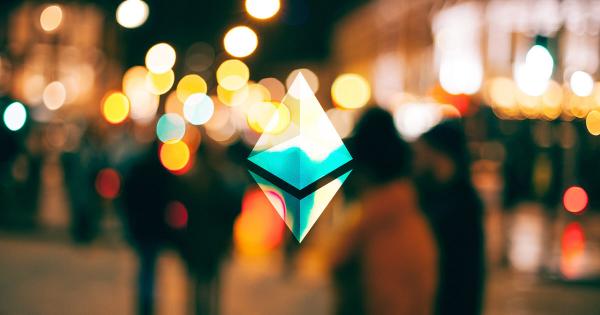 Joseph Lubin, a co-founder of Ethereum and the head of ConsenSys, the biggest blockchain software company in the world, re-affirmed his initiative to bring more than a million developers into the ETH ecosystem at ETHDenver.

ConsenSys first introduced the “1 Million Developers” initiative in October 2019 to expand the developer community of Ethereum and encourage a wide range of individuals to work on the blockchain protocol.

Will Ethereum price react in the long-term?

In 2017, Ivey Business School professor JP Vergne said that the best predictor of a cryptocurrency’s price is its developer activity.

High developer activity indicates a cryptocurrency indicates that the underlying blockchain network is seeing improvements on a regular basis, especially pertaining to scalability, efficiency, and privacy.

Throughout the past two years, the Ethereum developer community has focused on bringing Ethereum 2.0. A major component of the 2.0 release is proof-of-stake (PoS), an algorithm that removes mining to reduces resources spent on verifying transactions.

Scalability solutions such as second-layer protocols have also been in the works by both developers at the Ethereum Foundation and independent organizations.

Lubin noted at ETHDenver that when more developers are working on ETH, eventually, ETH will evolve into a more inclusive and comprehensive blockchain network.

“What does it actually mean to have a million people working on the Ethereum platform? It’s not just about funded projects and full time blockchain engineers: hackers, students, Web2 developers integrating elements of Ethereum into their existing work are also Ethereum devs. The more inclusive, frictionless blockchain-based systems we are all trying to build will be emergent. They will take shape incrementally, via bridges between legacy systems and new pathways, via small experiments and gradual policy changes.”

Due to the size of the Ethereum blockchain protocol, it is significantly more challenging to implement major changes and improvements onto the network than other small blockchains.

For that reason and many other smaller factors, the progress of Ethereum 2.0 was stagnant throughout 2019. With Ethereum 2.0 being streamlined and the number of developers working on ETH increasing consistently, analysts are highly anticipating the next phase of growth of ETH.

How will improvements benefit ETH?

Up until early 2019, there were not many decentralized applications (DApps) on ETH to call for an urgent improvement in scalability. Not many users were utilizing ETH and Ethereum-based applications on a day-to-day basis to the point where the network was extremely clogged up.

However, in recent months, the decentralized finance (DeFi) market has started to demonstrate a parabolic rate of growth.

According to DefiPulse, nearly $1.1 billion are now locked in DeFi platforms, most of which use ETH as the main collateral. Ethereum 2.0 and other scalability solutions would optimize many aspects of DeFi, generally improving user experience across the board.