Photo by Brandon Holmes on Unsplash

Verge is a privacy-focused cryptocurrency offering anonymity, speed, and low transaction cost. As the 30th most prominent coin by market cap, XVG a.k.a. “the future of privacy” finds itself competing for top tier in the privacy world, sizing up against the likes of Monero, Zcash, and DASH. While competition is fierce in this crowded space, a crucial weapon in Verge’s arsenal is its plan to be the first privacy coin offering smart contracts.

Verge is an anonymized cryptocurrency that operates in a  different manner to other similar cryptocurrencies such as Monero. Anonymity is optional on the Verge network, which employs a number of identity obfuscation techniques that are already in use today.

A unique element of the Verge project is the manner in which it integrates with both TOR, free software to enable anonymous communication, and I2P, which provides users with multiple layers of anonymization.

Verge allows users to choose whether they’d like to perform transactions on a public or private ledger via the “Wraith Protocol”. The Wraith Protocol functions as a simple toggle that provides users with the ability to quickly switch between completely anonymous or public transactions.

Importantly, the Verge project is 100% open source, with the Verge community contributing to development in a democratic manner.

Like most coins, Verge enjoyed an explosion in December’s bull market when it exploded 3000% in value to $0.30.

John McAfee pitched in to fuel the bullish sentiment, predicting on Twitter that the coin was bound for the $15 mark (a somewhat outlandish 150,000% increase from its price at the time). It has since dipped and dwindled significantly in the Q1 slump, swinging between $0.03 and $0.08 for the last month.

While Q1 remained mostly unremarkable for XVG, a cryptic announcement in late March set a new course for Verge, sending prices rocketing against the bearish market. The Verge team placed an unorthodox pretense for their crowdfund, requesting nothing short of 75 million XVG ($3.5 million) to be raised in days to secure and reveal an apparently lucrative partnership.

a sneak preview of our upcoming #iOS wallet! also, don't forget to donate to the crowdfund, as we have a massive potential partnership announcement if we reach the goal! #vergefam $XVG pic.twitter.com/NLZJoruXuf

Punters chipped in with initial enthusiasm, yet interest quickly waned. With the pot settling around the 20 million mark just a day before the deadline, an unlikely savior stepped in to rekindle notions of charity in Verge holders.

Privacy-payment platform Token Pay generously doubled all donations until the cap of 75 million was reached, all to the glorious cascade of a 40% price spike over 24 hours. For now, Verge fans wait with bated breath for the grand unveiling of the supposed “deal-maker” partnership.

Verge is the outcome of an earlier privacy coin project, DogeCoinDark. Some two years after its creation in 2014, the founders saw the need to legitimize their project, at a time when Dark carried specific connotations of criminal activity, and Doge was a novel meme bound only for whimsical internet forums. With this in mind, the team heralded the rebrand Verge in February 2016, ready to take flight as the premier privacy coin.

Unlike the bulk of privacy coins, the Verge project is entirely open-source and community-led – based in unknown locations all across the world in line with its principles of decentralization, privacy, and anonymity.

Granted, a core team that initially kickstarted the project values anonymity. For example, all listing creative pseudonyms on the coin’s blackpaper. Nevertheless, the team divulges some necessary information on their Medium such as the coin’s founder Sunerok:

Sunerok founded Verge Currency in 2014 and is the current developer of the project. He is a lifetime advocate of decentralization and open-source technology. He has 20+ years in network security and 6+ years in blockchain.

Given the community-driven nature of the project, Verge never conducted an ICO or pre-mined any coins – the community is responsible for all efforts in development and marketing.

While Bitcoin has redefined finance through its trustless peer-to-peer payment network, privacy remains one of its most significant design flaws. Its public blockchain ledger exposes balances and transaction records; compromising its utility for businesses or large-worth individuals. Privacy breaches and attempted hacks are inevitable with this level of transparency, which is inherently as risky as a bank account accessible to the public.

Whereas most privacy coins aim to solve this problem through cryptographic techniques, Verge addresses privacy when users connect to its network. It does so use TOR and I2P to cloak the IP addresses and geolocations of users, maintaining complete confidentiality at all times for untraceable, anonymous transactions.

With a 30-second block time, Verge supports up to 100 transactions per second in contrast to Bitcoin’s 7. The highly anticipated RSK implementation may see this figure skyrocket to 2000, putting it well ahead of the leading privacy coin, Monero. Lastly, fees are pegged at a small 0.1 XVG per transaction, making Verge ideal for everyday usage and small transactions.

These features are valuable propositions, yet on several levels, Verge does not offer the traditional qualities of a fully-fledged privacy coin, particularly when it comes to fungibility. Its transparent blockchain reveals destinations and transaction amounts, meaning Verge addresses and coins could be blacklisted in the event of foul play.

Verge has taken a unique approach to the release of technical information regarding the project. Instead of releasing a white paper, Verge has published a “black paper,” which is functionally identical but sounds cooler and more “anonymous.”

The Verge black paper does provide a surfeit of data on the technical architecture of the project, however. While the general tone of the black paper is approachable to less technically adept readers, the in-depth dive information provided on the execution of the anonymization technique used by Verge to complex transaction data is complex and is, in part, a primer on the Diffie–Hellman key exchange public-key protocol. 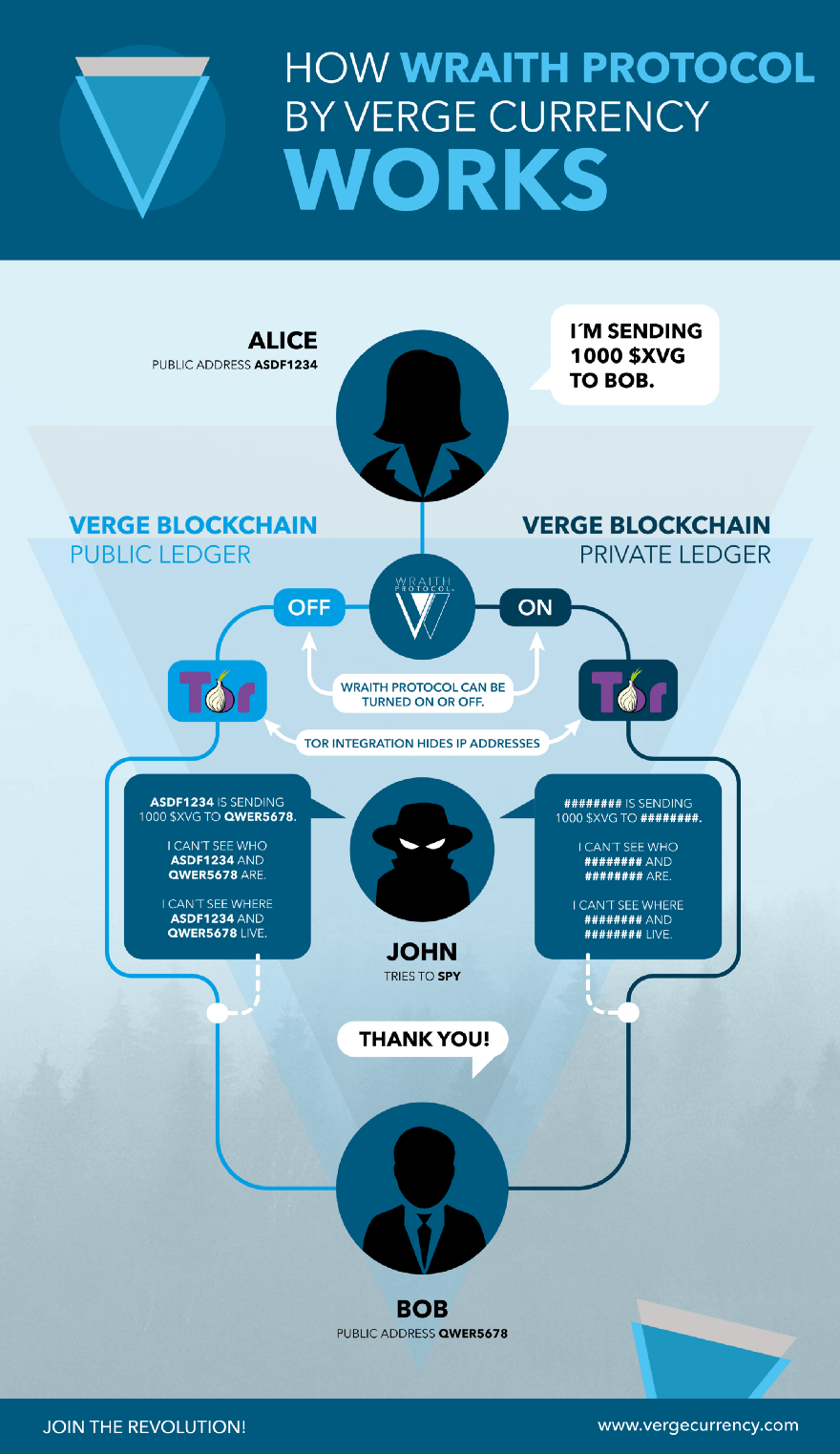 Verge, however, uses a variant of the Diffie-Hellman protocol to securely transmit information — the Elliptic-curve Diffie-Hellman algorithm (ECDH). This model allows two individuals that know each other’s public keys to calculate a “shared secret” that cannot be duplicated or associated with either key.

Verge allows senders to create unlimited one-time destination addresses on behalf of recipients through a method called stealth addressing. These addresses can only be recovered by the recipient, and can’t be linked to the sender.

Broken down into simple terms, the Verge model allows senders to create an output on the Verge blockchain that can be found by the recipient — the ECDH cryptography method will enable recipients to calculate the “shared secret” linked to any given transaction and retrieve it.

The CoreQT wallet adds another layer of obfuscation by allowing transactions to occur only over the TOR network, which hides IP information by passing data through a network of relays from node to node at random.

Where Verge falls short on fungibility, it makes up for delivering consistently on the goals of its roadmap.

First, the recent release of its TOR Android wallet will likely push XVG to the masses, allowing anyone with an Android device to send and receive transactions with total anonymity. The additional I2P wallet goes a step further, preventing ISPs from gaining access to transaction information (and governments, hackers, etc.). 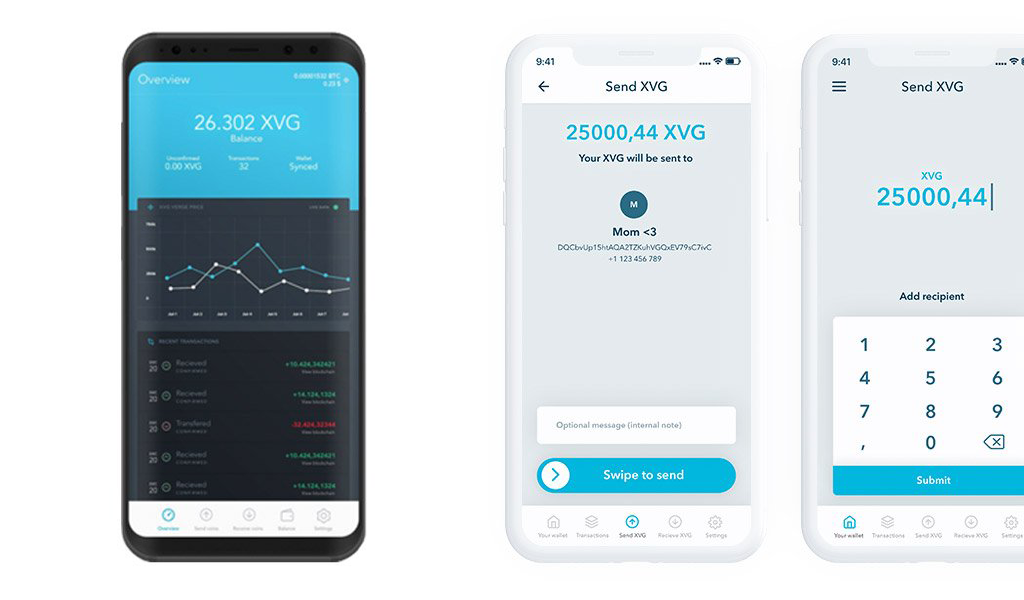 Next, there is the development of RSK technology, which will permit smart contracts and boost transaction speed for enterprise-grade usage. These are highly significant developments, making Verge the only platform to build and execute private and anonymous dAapps through smart contracts.

In spite of achieving most of its goals, the Verge roadmap does not continue past Q1 2018 – with smart contract implementation being the last notable development for the project. Future goals will need to be addressed to keep Verge a genuinely competitive privacy coin.

#VERGEFAM! @tokenpay is matching donations until we reach 50 Million $XVG of our 75 Million $XVG goal! #Vergefam, Lets make this happen TODAY! Please join https://t.co/xjkE9HeMMd and follow the instructions and post screen shots into the telegram group above! pic.twitter.com/A0eMXDjExi

Despite its healthy community, the coin remains on the periphery when it comes to affiliation. Vendors accepting Verge are primarily limited to the crypto-space, and Verge lacks significant partnerships. In light of this shortcoming, this area will be a central focus this year:

“Verge has a very big year ahead. 2018 is going to be filled with new releases, partnerships and privacy software.”

Verge boasts a sizable following, with over 260,000 followers on Twitter, more than 30,000 on Telegram, and nearly 50,000 community members on its subreddit. The core team posts on all channels regularly, and much of present discussion is around the successful release of Wraith Protocol, a long-awaited feature allowing users to choose a public or private ledger when making a transaction.

Much of the project’s latest chatter is centered around the announcement of a new crowdfunding initiative – an opportunity to see the open-source project “progress forward in the crypto space.” Community members are vocally expressing support for the fundraiser, backing the team’s intention to use funds to build partnerships, integrate Ledger Nano wallet support, bolster marketing efforts, and more.

As many of you are aware, no one on the Verge staff is paid to do the work they do and generally any marketing efforts that come from our team are funded out of our own day job salaries. That is why we need your help.

Where To Buy Verge

As an established coin, Verge is available on some prominent exchanges including Binance, Bittrex, Cryptopia, and more.

While Verge remains an underdog up against the larger privacy coins, it may soon get the leg up it needs if the implementation of RSK goes according to plan. This technology will be a tremendous breakthrough for Verge, lending it two invaluable features the other privacy coins are not currently bringing to the table – smart contracts and enterprise-grade transaction-throughput.

That said, what may hinder the project’s progress is its open-source nature. While this invariably appeals to blockchain advocates in support of decentralization, it may see Verge fall behind as more centralized projects advance faster with concentrated efforts.

Nevertheless, Verge is a strong contender in the race for privacy; a race that is far from finished. Whether the project reaches its ambitious milestones or falls short, 2018 will be a defining year for Verge.

Throughout the crypto market’s consolidation phase, the total supply of circulating stablecoins has been on the rise.