US Treasury Secretary Yellen advises against Bitcoin for retirement savings

Volatility and lack of fundamentals are cited as reasons why Bitcoin makes a terrible retirement savings vehicle. However, as the best performing asset of the last ten years, can it be ignored entirely? 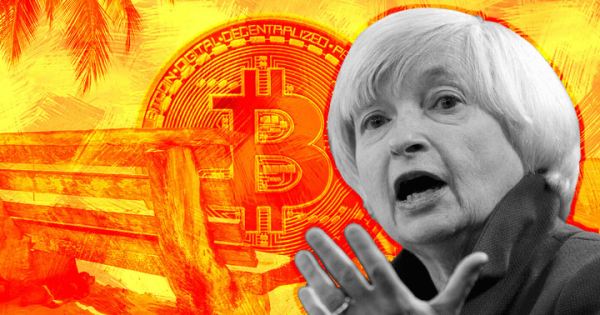 She added that it would be fitting for Congress to “address the danger,” suggesting legislative changes to retirement vehicles, such as 401(k)s, could be on the cards to exclude digital assets.

The largest provider of retirement plans in the U.S., Fidelity Investments, shocked the investment world in April by announcing plans to offer its 401(k) customers the option to invest in Bitcoin.

“Roughly 23,000 companies use Fidelity to administer their retirement plans, and Fidelity currently has more than $11 trillion in assets under administration.”

The firm will allow retirement savers to assign up to 20% of their account balance to the leading cryptocurrency, with individual fiduciaries able to set their own limits on employee contributions and allocations.

Fidelity is currently building out its digital assets platform, meaning the option won’t be available until later this year.

Cryptocurrency advocates see this as another step towards the legitimacy of digital assets. But others have blasted the move as a terrible idea.

Senior Research Analyst at Morningstar, Madeline Hume, said the difference between stocks and bonds in a retirement account versus BTC is that dividends and interest payments back the former. Bitcoin pricing is largely speculation-driven, which “makes it a bad fit” for retirement savings.

“The absence of fundamentals and valuations makes it a bad fit for a 401(k) plan.”

BTC outperformed all other assets over the past decade

Despite the hostile rhetoric, proponents would argue that as the best performing asset of the previous ten years, not including Bitcoin in a retirement savings vehicle would be overly cautious.

In 2021, the founder of Compound Capital Advisors, Charlie Bilello, tweeted an analysis of asset classes showing total percentage returns from 2011 to 2021.

A significant proportion of these gains came about early in BTC’s life cycle when it was priced relatively cheaply. Meaning that similar percentage moves are unlikely to happen again over the next ten years.

Nonetheless, with an annualized average of +230% gains, it is difficult to ignore Bitcoin as a vehicle for capital growth.