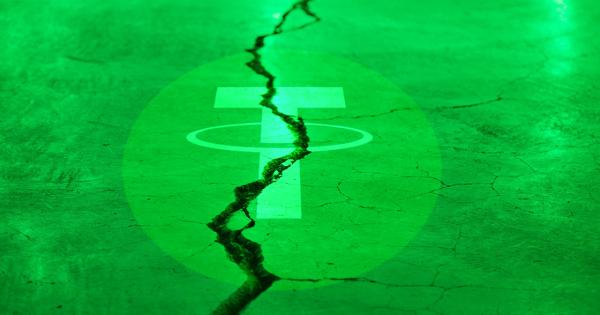 Tether, a stablecoin created to provide liquidity to cryptocurrency exchanges, hasn’t been a stranger to controversy. Since it was introduced in 2015, the company has been in the center of several media scandals, most of which focused on its inability to back its coins with fiat currency. Most recently, Tether’s parent company (iFinex) was accused by the New York Attorney General of hiding its losses and mixing client and corporate funds.

And now, recent Coin Metrics research found that the cryptocurrency was much more concentrated than originally thought—the data showed that only around 300 entities control around 80 percent of all Tether currently in circulation. Only 318 addresses hold $1 million or more USDT, Coin Metrics reported.

John Griffin, a finance professor at the University of Texas at Austin, told Bloomberg that this concentration of Tether suggests that control of Tether is in the hands of a few central players. All of them, he said, have the unique ability to swing Bitcoin prices and a vested interest in doing so.

“It also suggests that many exchange players have a vested interest in keeping the Tether game going,” he explained.

Most Tether held by exchanges, not whales

Tether’s high ownership concentration raises the level of risk in the crypto market, Bloomberg wrote, citing Sid Shekhar, the co-founder of market tracker Token Analyst. Shekhar said that the extremely centralized holdings bring about extreme volatility when large swathes of Tether are released in the market. Griffin echoed the statement, saying the dramatic surge Bitcoin’s price saw in 2017 was a direct result of market manipulation by Tether.

However, Bloomberg’s piece didn’t manage to raise any alarms, as dozens of Twitter users commented on the article, saying that kind of concentration was expected from Tether. Adam Back, the CEO of Blockstream, said that Tether’s primary use case is exchange trading and that the exchanges that hold large amounts of USDT also have millions of active users.

ofc most of tether is in exchanges – it's use case is exchange traders! the tether volume and bitcoin volume being close $9-10bil/day shows the use case also. you can't see the breakdown inside exchanges but they have collectively millions of users.

Many other users joined the discussion, saying these funds are actually on the balances of clients at those exchanges and not owned by the exchanges themselves.

Who do you think those funds belong to? Those are on the balances of clients of those exchanges, not the exchanges themselves.
You can't see that from just looking at wallet addresses.

Coin Metrics found that Tether was used in 40 and 80 percent of all transactions on Binance and Huobi, respectively. With these two being one of the largest crypto exchanges in the world, it’s no wonder why USDT ownership would seem concentrated. And while there are many reasons to distrust Tether, that data may contradict the narrative around USDT concentration.