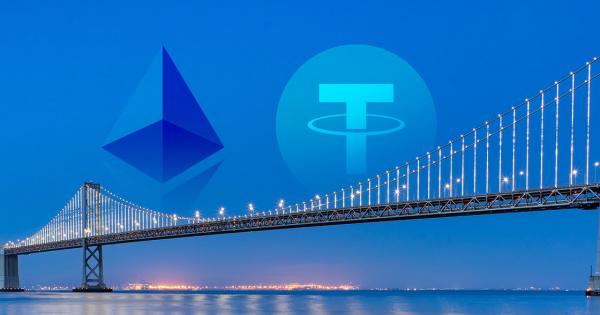 Tether’s USDT is steadily migrating from Bitcoin Omni-based addresses to Ethereum-based ones, with 40 percent of USDT now using the ERC-20 standard. Major cryptocurrency exchanges Binance and Poloniex announced they were both moving their Tether addresses from Omni.

While Bitcoin dominance over the cryptocurrency market is undisputed, Bitcoin-based protocols are slowly becoming less popular. The increase in adoption pushes transaction numbers way higher than what protocols such as Omni, an open-source asset platform on the Bitcoin blockchain, can handle, which is why many traffic-heavy cryptocurrencies have begun moving their coins to other platforms.

Tether (USDT) is the biggest and most notable company that has started to abandon the Bitcoin-based Omni protocol in favor of the more efficient Ethereum. Anthony Sassano, an Ethereum developer and head of marketing at Set Protocol, pointed out that the number of USDT as ERC-20 on Ethereum has significantly increased, and is now up to almost 40 percent of the total amount of USDT on Omni.

According to Tether’s ‘transparency’ page, the company currently has around $2.8 billion USDT in circulation on Omni. The protocol also holds very little fiat currency, with a balance of just over €1,600 currently on Omni. However, there is over $1.1 billion in USDT currently on Ethereum, as well as more than €50 million.

Sassano said it was very likely that the majority of USDT in circulation will live on Ethereum instead of Omni.

Tether is steadily migrating from Bitcoin to Ethereum. USDT as ERC20 on Ethereum is now up to almost 40% of USDT on Omni/Bitcoin.

It's only a matter of time before the majority of USDT lives on Ethereum instead of Omni/Bitcoin 🐬 pic.twitter.com/vzzBWkHc5f

Tether isn’t the only one migrating USDT from Omni. Some of the biggest cryptocurrency exchanges in the world have already begun switching to ERC-20 based addresses for Tether’s stablecoin.

On July 3, Binance announced that Ethereum’s ERC-20 based addresses will be standard from now on when it comes to USDT. Apart from a 30-minute downtime for USDT withdrawals and deposits, the switch was relatively smooth. However, Binance noted that users will not be able to withdraw Omni-based USDT from their accounts from now on, but Omni-based USDT deposits will still be available.

#Binance Will Change $USDT Deposits & Withdrawals to be ERC20-basedhttps://t.co/3rNcVEWJ59 pic.twitter.com/WeVR195qrF

Cryptocurrency exchange Poloniex announced it will begin supporting ERC-20 based USDT deposits on the same day. Users will also still be able to deposit and withdraw USDT from Omni addresses, the exchange said, alongside Tron and Ethereum-based tokens.

Both Huobi and Poloniex said that Ethereum-based USDT is much faster and efficient than relying on the Omni network.

Legal representatives for Bitfinex and Tether confirm the widely held suspicion that USDT is not one-to-one backed by US dollars.

Tether, the leading stablecoin, recently unpegged from the US Dollar after news that the New York State Attorney General is investigating iFinex Inc, which operates Bitfinex and owns Tether Ltd USDT dropped as low as $0.975 against the US Dollar while the other top three stablecoins—USDC, TUSD, and PAX—enjoyed an approximately 6.5 percent premium.