The total market cap of all stablecoins surpassed $150 billion on Monday. Tether’s USDT is still the largest stablecoin on the market, but Center’s USDC is catching up. 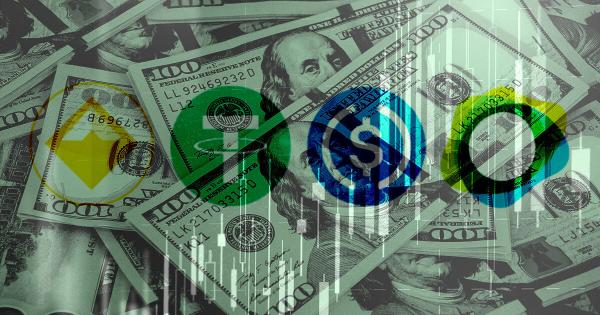 The adoption of stablecoins, digital assets whose values are pegged most commonly to the U.S. dollar, is spreading by the day as more and more private users and institutions appreciate the benefits of these tokens.

As reported in a blog post by researchers Kyle Waters and Nate Maddrey at Coin Metrics, analyzing recent on-chain trends in stablecoin activity, the total market cap of all stablecoin taken together surpassed the $150 billion mark on Monday.

According to the report, the main reason why stablecoins are handling more economic throughput is because their total supply has increased dramatically. The total supply of stablecoins is now slightly above $150 billion, a new record and a sharp contrast from 2020.

The largest stablecoins by total supply are mostly issued and backed by third parties. These include Center’s USD Coin (USDC), BUSD issued by Binance, and Tether’s USDT which together account for over 90% of the total supply of stablecoins. Of these stablecoins, USDT is still the market leader with almost $78 billion in market cap; USDC comes second with a market cap of just over 51$ billion.

Coin Metrics’ report points out a few notable trends: USDC recently passed $44 billion in supply on the Ethereum blockchain, making it the largest stablecoin on Ethereum; USDT’s share is approximately 50% across the three networks the token is issued on; and the decentralized stablecoin DAI’s supply seems to be moving to side-chains and Layer-2 networks on Ethereum via co-called bridges that transfer token assets between different blockchains.

Looking at the average stablecoin transfer in dollars per day, Binance’s BUSD and Huobi’s HUSD are in the lead as these are exchange-issued coins likely primarily used to facilitate trading on the respective exchange. This metric’s low end is Tether on Tron, which has distinct on-chain activity patterns from Tether on Ethereum. For Tether on Tron, the median transfer is about $250, while over 30% of transfers are less than $100.

At the same time, data from analysts Santiment shows that Tether’s addresses valued at $1 million are on the cusp of returning to owning at least 80% of USDT’s supply for the first time in 3 weeks. Generally, stablecoin addresses with large holdings increasing their buying power is a good prospect for crypto’s long-term future.