The oracle platform got one of its biggest political endorsements yesterday. 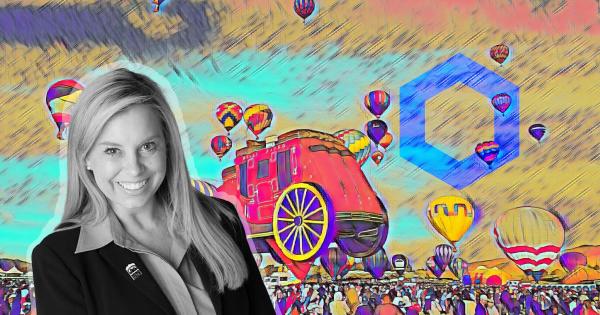 Photo by Daniel Akre on Unsplash

The oracle platform got one of its biggest political endorsements yesterday. It didn’t even have to pay for it.

Hillary Schieve, the mayor of Reno, Nevada, pushed for the adoption of oracle protocol Chainlink in a tweet yesterday. She became one of the first-ever politicians to publicly endorse the platform.

Sorry @FrancisSuarez you should have bought $LINK
still a gift 1000EOY

PS: Our skiing is also epic today in @renotahoe https://t.co/4s1jFnc39c

Chainlink is the world’s biggest oracle provider, with its settlement token LINK valued at over $9.4 billion as of press time. Oracles are third-party data tools that fetch data from outside a blockchain to within it, as blockchains can not—by design—verify the authenticity of the incoming data even though they are immutable stores of data.

Using Chainlink helps avoid this. The oracle service fetches data from multiple providers to provide a single, synchronized feed to clients and users. Doing so allows other applications to work seamlessly without depending on a single (or doctored) data supplier.

And it’s a project that Schieve is now endorsing. She said in a tweet yesterday, “The time is now to work on great projects for Nevada. $LINK,” a statement that affirmed some earlier tweets which suggested that she even held LINK tokens.

Chainlink can find many use cases in Reno. ChainLinkGod, an early-adopter of Chainlink and a popular community ambassador, noted that apart from oracle usage for weather, health, and traffic (replying in the affirmative to another tweet), a potential Chainlink node could be used towards maintaining a record of the local government.

“A Reno Chainlink node could also provide an immutable record of all government actions, increasing transparency and community trust in the information.”

Exactly, there is an entire world of data waiting to be brought on-chain, a Reno Chainlink node could also provide an immutable record of all government actions, increasing transparency and community trust in the information

Crypto friendly politicians in the US

The brief discussion wasn’t sudden for Schieve, who has remained the Reno mayor since 2014 as an independent candidate. She has previously called for the betterment of society using technology and even opened up to crypto donations before her reelection campaign in 2018.

Meanwhile, Scheive’s endorsement for Chainlink wasn’t the only crypto story to have emerged from a politician. Elsewhere in Miami, city major Francis Suarez uploaded the Bitcoin whitepaper to the city’s government site, becoming the first US local government to do so.

The City of Miami believes in #Bitcoin and I’m working day and night to turn Miami into a hub for crypto innovation.

The file was uploaded in response to an ongoing legal campaign by Craig Wright, the co-founder of Bitcoin SatoshiVision who claims to be the inventor of Bitcoin (he has failed to provide any conclusive proof of these claims thus far).

As CryptoSlate reported last week, Wright is taking down Bitcoin whitepapers hosted on several websites by claiming it to be his property. In response, several influential figures, such as Suarez (and later even Schieve) , have uploaded the Bitcoin whitepaper on their own sites.