The official has spearheaded progressive technology regulation for the East coast city. 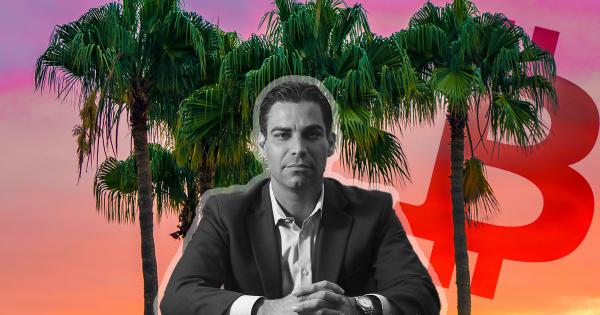 Photo by Martin Zaenkert on Unsplash

The official has spearheaded progressive technology regulation for the East coast city. And he’s now turning his attention towards Bitcoin.

Miami Mayor Francis Suarez teased a Bitcoin purchase earlier today, as per a tweet. This was not intended for his personal account, however, with Suarez stating that Miami’s treasury funds could find their way to Bitcoin.

“We hope to make our City of Miami one of the most crypto-forward and technologically advanced cities,” Suarez said in the tweet.

We hope to make our City of Miami one of the most crypto-forward and technologically advanced cities. https://t.co/eagwXou1fq

Suarez is already lamenting not buying the world’s biggest crypto asset earlier. As per a related report on Fox Business, the Miami Mayor said that the reserves could have been “200 percent plus” had he committed to the plan earlier.

The Mayor added that Miami was even looking into allowing citizens to pay taxes and fees to the city in Bitcoin, stating it was already looking to create a regulatory framework that made the city of Miami “the easiest place in the United States to do business if you’re doing it in cryptocurrencies.”

“I want the creative and the innovative class to come here and create high-paying jobs for my residents.”

He added that Bitcoin was a “a very attractive investment” and that the city of Miami is even considering “diversifying our investment portfolio” and holding a percentage of investments in Bitcoin, as per Fox.

Bitcoin has been embraced in a big way by hedge fund managers, government officials, and technology entrepreneurs in the past year.

In May 2020, Paul Tudor Jones called Bitcoin the “fastest horse” to bet on and purchased over $70 million worth of Bitcoin futures. He was joined by other fund managers in similar efforts as well.

Then, in August, business intelligence company MicroStrategy purchased over $250 million worth of Bitcoin, followed by another $175 million purchase the next month. The spree didn’t end, however: By December 2020, MicroStrategy picked up another $650 million worth of Bitcoin using a convertible note, bringing its total holdings to over $1 billion.

Miami Mayor @FrancisSuarez is set to invest government cash reserves into Bitcoin, while also accepting Bitcoin for taxes and other payments

The Bitcoin wave is coming

MicroStrategy is not selling its Bitcoin anytime soon either, stating it to be one of the biggest and best hedges against all other asset classes on the market. It’s a point Suarez seems to believe as well. He said recently, “It’s only going to go up.”