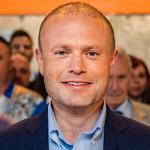 Dr. Joseph Muscat was born on the 22nd of January 1974. He graduated with a Bachelor of Commerce in Management and Public Policy; a Bachelor of Arts with Honours in Public Policy and a Master of Arts in European Studies from the University of Malta. In 2007, he attained a Doctorate of Philosophy in Management Research from the University of Bristol with a thesis on Fordism, multinationals, and SMEs in Malta. Dr. Muscat successfully contested the first European Parliamentary elections in Malta in 2004. Sitting with the Party of European Socialists, he held the post of Vice-President of the Parliament’s Committee on Economic and Monetary Affairs and substitute member of the Committee on the Internal Market and Consumer Protection.

He was a member of a number of delegations for relations with Belarus and with the countries of south-east Europe. As an MEP he supported a reduction in the tax for satellite television, the right for customers to watch sports events for free, and a number of issues related to environmental protection in Malta. He formed part of a team responsible for a report on the roaming mobile phone bills and sale of banks. In 2006 he was the recipient of the Outstanding Young Person of the Year. Dr. Muscat was elected as the Leader of the Partit Laburista in June 2008.

He took office as Prime Minister of Malta on the 11th March 2013. His first premiership was marked for pulling together a national consensus for economic growth, based on a restructured Maltese economy. The directional change resulted in the economic growth of over 6 percent, the elimination of the public deficit and a decrease in unemployment to historic lows. These were a number of factors that contributed to Malta increasingly becoming an attractive location for foreign direct investment in sectors such as financial services, online gaming, information technology, maritime and aviation hubs, and high value-added manufacturing clusters.

Among others, the Muscat administration’s family-friendly measures led to a 9 percent increase in female participation in the labor market, poverty was reduced and pensions were increased for the first time in 25 years.

His administration was also instrumental for the strengthening of civil liberties, introducing legislation establishing civil unions for both same-sex and opposite-sex couples with the same rights as those available to married couples, including joint adoption rights. Same-sex marriage was legalized in mid-July 2017. Joseph Muscat was sworn in as Prime Minister for a second term on the 5th of June 2017.

Prime Minister Muscat is currently the Commonwealth Chair-in-Office. He also led Malta’s Presidency of the European Union in the first half of 2017. Dr. Muscat is married to Michelle and they are the parents of twins, Etoile Ella and Soleil Sophie.