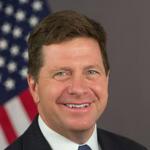 Jay Clayton was nominated to chair the U.S. Securities and Exchange Commission on January 20, 2017, by President Donald Trump and sworn in on May 4, 2017.

Chairman Clayton was born at Fort Eustis in Newport News, Virginia, and was raised primarily in central and southeastern Pennsylvania. In his professional career, he has lived in Philadelphia, New York, London, and Washington, DC.