After Jamie Dimon’s (CEO of JPMorgan Chase) crude remarks about Bitcoin came out in CNBC’s interview a few weeks ago, Bitcoin took a quick plunge. 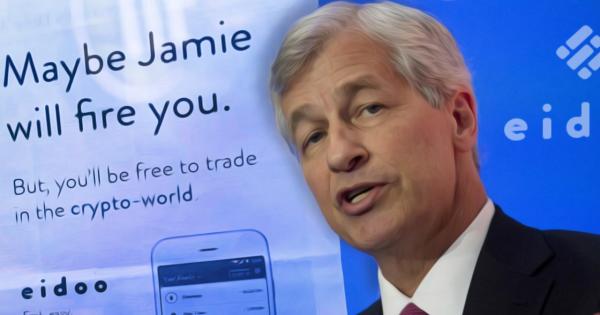 After Jamie Dimon’s (CEO of JPMorgan Chase) crude remarks about Bitcoin came out in CNBC’s interview a few weeks ago, Bitcoin took a quick plunge. Many saw this as a moment to buy more, however, and the price has been up over $1000 since the remarks.

“So right now I say these crypto things are kind of a novelty,” Dimon said. “But the bigger they get, the more governments are going to close them down.”

He is correct to an extent: Around this time, China announced a ban on Chinese exchanges, as well as an all-out ban on ICOs (initial coin offerings). Governments are having a hard time trying to figure out how to deal with a decentralized currency, the first of its kind.

One cryptocurrency startup has decided that Jamie’s remarks were a perfect ploy to advertise none other than (yes, you guessed it): Bitcoin.

Eidoo is a very easy-to-use cryptocurrency wallet. They plan to roll out features that we are used to seeing in everyday life, like debit cards that you will be able to use at checkouts, and will be able to hold all ERC20 tokens and Ethereum (as well as Bitcoin).

“Maybe Jamie will fire you. But, you’ll be free to trade in the crypto-world.”

Clearly, many people, even on Wall Street, see decentralized currencies and cryptokens as the future.

Even in the early stages, Bitcoin and other cryptocurrencies are a much faster, safer, and more effective alternative to fiat. Centralized banks are going to lobby against decentralized currencies just as oil companies lobby against electric cars.

The interesting difference of the battle between centralized and decentralized currencies that doesn’t exist with traditional lobbying clashes is the lack of transition.

Decentralized currencies call for fewer middlemen involved; smart contracts and blockchain will take care of many of the traditional jobs that a hierarchical structure, such as JPMorgan, need to survive. In other words: there’s far less room for centralized financial institutions to profit. This results in a huge push for centralized banks and corporations to keep Bitcoin looking like a scam.

As with Eidoo’s reaction, other cryptocurrency supporters are combatting  negative remarks. In an interview with CNBC John MacAfee, a longtime supporter of Bitcoin, challenged what Dimon said about Bitcoin.

He even went on to remark that it is not Bitcoin that is the fraud, but the dollar that is fraud.

“The fact that bitcoin is consistently growing in its use and its value has to say something,” McAfee said. “Sure, it will rise and fall, as all new technologies are. But at the same time, it is certainly not a fraud.”