The term ‘DAO’ (otherwise known as decentralized autonomous organizations) still carries with it the negative stigma following the DAO hack in 2016 (leading to the controversial hard fork that resulted in Ethereum and Ethereum Classic), but it would be foolish to shelve the concept of decentralised autonomous organisations altogether, purely because one iteration had been […] 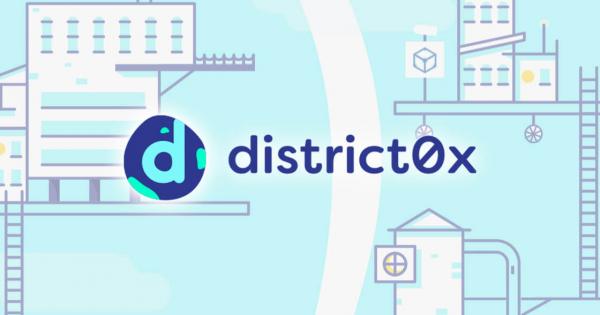 The term ‘DAO’ (otherwise known as decentralized autonomous organizations) still carries with it the negative stigma following the DAO hack in 2016 (leading to the controversial hard fork that resulted in Ethereum and Ethereum Classic), but it would be foolish to shelve the concept of decentralised autonomous organisations altogether, purely because one iteration had been poorly coded.

When it comes to (hopefully more successful) platforms enabling the creation and running of decentralized organizations, few can match district0x.

Its team have a vision of a digital realm free of the traditional governance structures that we’ve become so accustomed to and are well on their way to releasing a polished framework to create and run blockchain-based businesses.

The whitepaper draws on the real-world examples of Uber and AirBnb, whose business models revolve around the collective power of their users, as opposed to monetizing their own tangible assets.

Despite the userbase being the workhorse of these organizations, however, district0x takes issue with their lack of a stake in the business and highlights the nonetheless centralized hierarchy in their operation.

The district0x team, comprised of established veterans of the crypto-industry, see potential in these pseudo-decentralized structures, though, and wants to see users participating in the decision-making process.

The main problem, it seems, is that cohesion amongst communities that is hard to achieve without some entity calling the shots, so to speak. Or it was until the Ethereum blockchain opened the door to a radical new approach.

The d0xINFRA framework allows anyone to create what is called a ‘district’ (described as markets and communities existing as decentralized entities). A handful of basic functionalities (ranking users, creating posts, searching for content) are provided to the user, the idea is that they can develop their own platform with ease.

Unlike too many ICOs nowadays that are selling vaporware, there are already fully-operational districts deployed on the Ethereum mainnet.

Ethlance was the first district to launch. Similar in format to crypto.jobs or BlockchainJobz, the site allows companies to advertise work paid for in Ether. On the surface, Ethlance isn’t groundbreaking – it appears to be a run-of-the-mill Craigslist-type job board (albeit with a much nicer UI).

The real magic happens under the hood: the district runs on 14 smart contracts (fully open-source) on the Ethereum blockchain, relying on IPFS to deliver content. It has attracted a number of users since being deployed, who enjoy the service for free (omitting, of course, the gas fees that keep the blockchain operational).

After the first successful experiment, the district0x team deployed Name Bazaar. An auction site for names registered on the Ethereum Name Service, Name Bazaar allows users to bid on their desired listings, or put registered names up for sale.

The ability to purchase gems like fourtwenty.eth, as exciting as it may be, is not the real takeaway from the second district’s success – what has been effectively created here is a method of trading crypto assets on a decentralized platform. While currently limited in which assets are available, Name Bazaar is an excellent proof-of-concept as to how a marketplace could scale with no central ownership, while providing a valuable service.

The district0x token (DNT), much like Aragon, could be classed as a governance token. Staking DNT tokens in a district confers upon the participant voting powers, the weight of which are proportionate to the amount staked in relation to the total (a user staking 300 tokens out of a total of 1000 would, therefore, have 30% of the voting power).

DNT is not a currency in of itself — the platform plans 0x protocol integration to remain agnostic on the monetary front). It has flown under the radar for some time, with a market cap of under $100 million (and ranks 185th in the crypto rankings). Since its ICO in July of 2017, it has seen returns of 10x at its peak in early January, although the value has been dwindling since.

The district0x team has a reputation for being some of the most communicative and transparent developers in the crypto-space, even publicly sharing their company salaries in a spreadsheet for everyone to see. They even have dedicated transparency page with public links to:

district0x has a strong and vocal community of 47.3K Twitter followers and 4100 members in its Telegram channel. They do not have as strong of a Reddit community as other coin projects, with only 6,417 subscribers at the time of writing.

The devs are praised for regularly communicating with their followers on both platforms, as well as on Medium.

Their collaboration with other projects in the blockchain space is extensive. district0x has partnered with the aforementioned Aragon (used in the backend of d0xINFRA), and is working on 0x integration.

As they progress through their roadmap, the team intend on creating more districts to showcase the potential of the platform, and will undoubtedly continue to network with more crypto projects (as it has done with Bounty0x and will do with Decentraland).

The district0x team has put together a detailed roadmap consisting of key milestones, however, they do not currently have any dates attached to each milestone.

Prior to Contribution Period v0.2

Prior to Contribution Period v0.2

Where to Buy district0x

DNT can be purchased on Binance or traded for other cryptocurrencies via Shapeshift. I’m not trying to tell you what to do with your hard-earned funds, but I can’t fathom why anyone would pass on a project that is working to make Meme Factory a reality.

The potential applications for decentralized marketplaces built on top of district0x is nearly limitless. The team is a well-rounded group of experienced developers and have a solid roadmap that makes it one of the top coins to watch in 2018.

For more information about district0x, including price, market cap, social media links and founders, please visit our district0x coin profile or watch the video below.