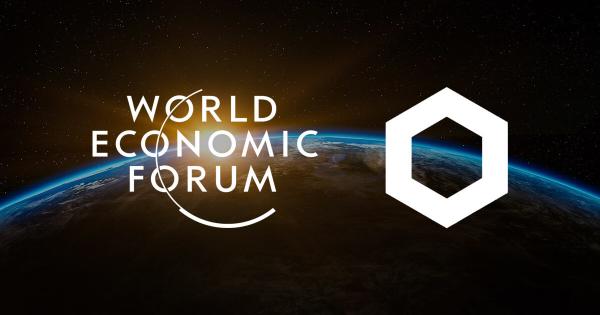 Blockchain agnostic platform Chainlink is now recognized as a “technology pioneer” by the prestigious World Economic Forum (WEF), as per a release this week. MakerDAO, a DeFi-centric project, Lightning Labs, and Bitcoin analytics firm Elliptic were other awardees.

Chainlink made the list among hundreds of other blockchain and cryptocurrency companies. Lately, the former project has been forming partnerships and getting its protocol onboarded to several other crypto projects, while the latter is making advancements in DeFi-focussed areas.

World Economic Forum’s technology pioneers are early to growth-stage companies are involved in work towards the design, development, and deployment of disruptive technologies and innovations. The Forum earmarks such firms to have a “significant impact” on business and broader society.

Pioneers are selected based on the community criterias, which includes innovation, impact, and leadership as well as the company’s relevance with the World Economic Forum’s other platforms.

Most pioneers work in the fields of AI, IoT, robotics, blockchain, biotechnology, and fintech firms that world towards a more inclusive, technologically-forward society.

As a perk, Chainlink co-founder Sergey Nazarov can personally participate in World Economic Forum activities, events, and discussions in 2020 and beyond.

The firm can also, by virtue of its inclusion, contribute to various forum initiatives until 2022, working with policymakers and private sector leaders to help define the global agenda on key issues.

Nazarov spoke on the development:

“We’re proud to play a role in bringing accountability and automation to global and local economies, and we look forward to contributing to Forum dialogues on this challenge.”

With the award, Chainlink, MakerDAO, and Lightning Labs join a cohort of high-profile startups which went on to become household names. Examples include Airbnb, Google, Mozilla, Spotify, TransferWise, Twitter, and Wikimedia.

NFT devs @natealex6677 & @skylerfly from the generative art project ChainFaces are using #Chainlink VRF to power the spin-off game FaceGolf. Chainlink VRF will be used in determining the outcome of golf matches, the random creation of new #NFTs and more https://t.co/OHCh1NYj2o

Chainlink’s oracles are used beyond crypto projects. Markets Insider notes Google, Oracle, and SWIFT use oracles in some capacity, while smart contracts firms Polkadot, Synthetic, Aave, among others, utilize oracles heavily in their protocols as well.

Users of online betting and savings games always have a question — are winners truly picked on random and if they are “real” persons.

Taking blockchains to the next layer Info Twitter LinkedIn