Bitcoin has been struggling to remain above the $8,000 support level in a hostile market where almost every signal indicates a bearish sentiment. The decreasing number of profitable holders on the network and a shocking 97 percent drop in large transactions spell trouble for the world’s largest cryptocurrency.

Almost every Bitcoin metric in the red

The world’s largest cryptocurrency took a massive hit at the beginning of the week, despite most predictions anticipating a slow and steady price recovery. A massive sell-off triggered a drop of more than 4 percent in less than 24 hours, with Bitcoin now struggling to remain above $8,000.

Bitcoin has been one of the few cryptocurrencies where a majority of its holders didn’t lose money on their investment, but the insanely volatile price in the past few days has increased the number of addresses who lost money on Bitcoin.

For any address with a BTC balance, IntoTheBlock identifies the average price at which the coins were bought and compares it with its current price. Calculating how many addresses are in or out of the money creates a more realistic picture of an asset’s volatility.

Despite more than two-thirds of addresses being in the money, the number of those whose balances are at a loss has increased in the past week has drastically increased.

The Bitcoin network is stagnating

The increased number of addresses out of the money could be what caused the Bitcoin network to stagnate. Everything from the average transaction size to the average balance on the network has been in decline, with the only slightly growing metric being the number of bears that have shown up on the market.

Large transactions on the network have taken a huge hit. The number of transactions larger than $100,000 decreased by almost 35 percent in less than two days, while the total volume was slashed in half.

In line with the decreasing number of large transactions, the overall number of transactions on the network has also been declining.

While a handful of optimists remain, most analysts and traders are now signing to the tune of a bearish market. If a downtrend lasts until the end of the year and continues throughout 2020, it could be the first time Bitcoin enters a halving while bearish. 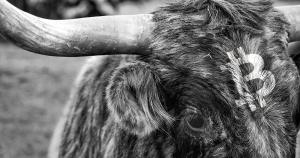