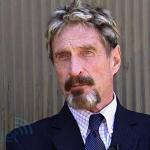 John McAfee is a world-famous tech CEO, computer scientist, civil disobedience activist, privacy advocate, and pioneer of the commercial anti-virus industry, and recent Libertarian candidate for President of the United States. McAfee believes that a return to the founding principles of Liberty and Justice for all is America’s only hope to restore sanity to our government and society.

John McAfee expects to be appointed as CEO of MGT Technologies, Inc., whereby he will launch a security and privacy revolution.