Miami mayor volunteers to be the first U.S politician to take salary in Bitcoin

Francis Suarez is set to become the first U.S politician to get paid in Bitcoin. But, the mass adoption tipping point is still far away. 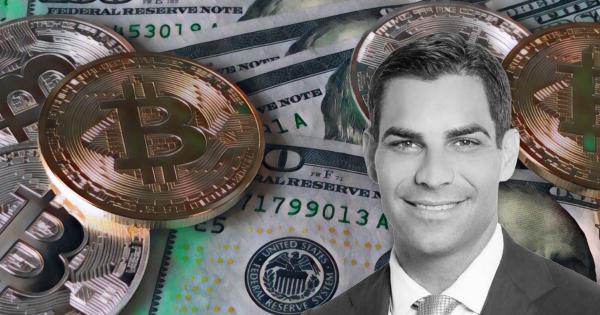 Mayor Francis Suarez tweeted he’s going to take his next paycheck in Bitcoin. He called on @Sarasti, the CIO at the City of Miami, to make this happen.

“I’m going to take my next paycheck 100% in bitcoin…problem solved! @Sarasti can you help?”

Suarez’s wish was inspired by a tweet from Bitcoin-bull Anthony Pompliano, who made a post posing the question, which U.S politician would be the first to accept their salary in Bitcoin?

Over the last few years, Pompliano has been a central figure in driving Bitcoin adoption forward. The path to which would involve workers being paid in $BTC.

Many sports stars have opted to go this route as well, but this still isn’t a mandate that’s fully approved by leagues, or in Suarez’s case, the City of Miami.

In December 2020, Russell Okung, then an offensive tackle for the Carolina Panthers, opted to get half his $13 million salary in Bitcoin, making him the first NFL player to do this.

Speaking on why, Okung demonstrated that he’s wise to the ways of the world by saying being paid in Bitcoin is a way to counter the “corrupt, manipulated economy we all inhabit.”

“The way money is handled from creation to dissemination is part of that power. Getting paid in bitcoin is the first step of opting out of the corrupt, manipulated economy we all inhabit.”

Since then, other sports stars have also followed Okung’s lead. For example, Sean Culkin, a former tight end at the Kansas City Chiefs, became the first NFL player to take 100% of his salary in Bitcoin.

And more recently, Aaron Rodgers, quarterback for the Green Bay Packers, said he’s taking a proportion of his salary in $BTC as part of a promo with Cash App.

It’s not just $BTC that’s in the mix. Tom Brady, the quarterback for the Tampa Bay Buccaneers, said he’s open to getting paid in Ethereum or Solana, as well as Bitcoin.

However, the NFL isn’t on board with these deals. Speaking about Okung, an NFL spokesman said all players still get paid in U.S dollars. It’s just that, in the case of Okung, Strike (formerly Zap) is the third party that converts dollars to Bitcoin after Okung gets paid.

Meaning, whatever players do with their dollar salaries after getting paid isn’t anything to do with the NFL.

Suarez set to be the first U.S politician to get paid in $BTC

@Sarasti also chimed in, saying he’s already set things off by registering with Strike. He added that he’s already getting paid a proportion of his salary in Bitcoin, which has worked out “flawlessly” for him.

Already sent over @ln_strike link to register. My experience receiving a portion of my pay last week went flawlessly. And Mayor already scaling my "pilot" to ? allocation. Boss move.

However, the real watershed moment comes when employers pay employees directly in Bitcoin. While Suarez will get his next paycheck in Bitcoin, this is still actioned after he gets paid in dollars.

Without policy change at the employer level enabling direct Bitcoin salary payments, this is merely a showboating gesture, albeit one that’s a step in the right direction.