Hoping it would benefit the local economy and further the growth of grassroots football, McCormack decided to introduce a new financial model for running his team–envisioning the club to operate on a Bitcoin standard. 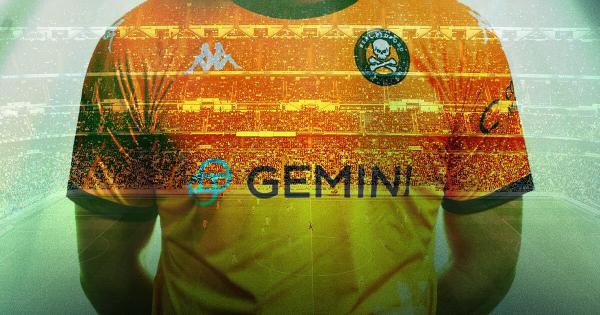 Crypto exchange Gemini recently announced a major sponsorship deal with Real Bedford FC, joining the growing list of industry partners, whose support of the small UK football team with “Bitcoin at its heart” will rise to the Premier League.

Last December, famous Bitcoin bull Peter McCormack acquired the non-league football team in his hometown, and has been developing a strategy to incorporate Bitcoin into the club’s every commercial aspect–from merchandise and sponsorship endorsements, to developing an education program for fans and community members.

Aligned with the chairmen’s bullish plan

The New York-based crypto exchange decided to back McCormack’s small club, after talking to “all the big European teams.”

According to McCormack, who acts as the club’s new chairmen, Real Bedford’s commercial success and tapping into national and international audiences will allow investment into football excellence, and beyond–boosting the local economy.

Per the deal, the Gemini logo will appear on the club’s jersey.

Real Bedford partnered with Kappa for its 2022/23 shirts–expecting the swag to become a significant revenue stream for the club.

Acquired as Bedford FC, McCormack decided to rebrand the team as Real Bedford at the end of the 2021/22 season.

Besides Gemini, the club’s list of partners continues to grow, amassing some of the major players in the crypto industry.

The likes of Compass Mining, Casa, Hut 8, Luxor, ​​Fortris, and BlockFi already stepped to the court as official partners.

Building the fan base

Since McCormack became the chairman, the club locked £500.000 in sponsorships sold, with additional £250.000 in discussion.

But big companies are not the only ones aligned with his vision for Real Bedford, as the team’s fan base continues to grow among Bitcoin enthusiasts.

While non-league clubs typically depend on commercial revenue of their local area, McCormack’s idea to tap into a wider audience, aka Bitcoin community, seems to be unraveling as planned.

On the back of significant national and international media interest, the Real Bedford already amassed more than 10.000 followers on social media and over 40 registered international supporters clubs.

As envisioned, the tight relationship with Bedfordshire Football Association will help support grassroots football, and direct funds to local projects.

The club will make all games free for the next two seasons, and offer cheaper swag for the local fan base.

Furthermore, Real Bedford is about to expand its infrastructure–establishing women’s, reserve and youth teams.

Those wondering when the club will announce dropping its NFT collection are about to get disappointed.

The line is drawn–Bedford is and will remain a football team operating on a Bitcoin standard.

With this in mind, Real Bedford’s long-term investment funds will be held in Bitcoin.

As of December 2021, the club’s Bitcoin Treasury holds 1.329786 BTC, according to the income report for Nakamoto 11 Ltd–the holding company for Real Bedford FC.