The world’s billionaires and influential businessmen are increasingly speaking on Bitcoin as a hedge and investment while calling out the excessive money printing in the United States and uncertainty in financial markets. 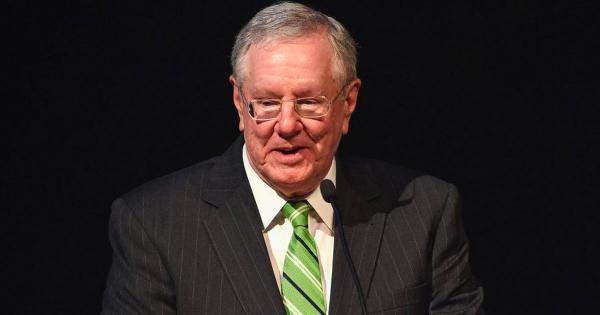 The world’s billionaires and influential businessmen are increasingly speaking on Bitcoin as a hedge and investment while calling out the excessive money printing in the U.S. and uncertainty in financial markets.

The latest to tout Bitcoin is media magnate Steve Forbes, chairman and editor-in-chief of Forbes Inc. He believes the currency helps stabilize the government-controlled financial system and urges technological development to continue on the Bitcoin blockchain.

In an interview by the U.S. Center for Natural and Artificial Intelligence this weekend, Forbes spoke on cryptocurrency, the digitalization of finance, and the future of currencies amongst broader topics.

Cryptocurrencies, Forbes noted, have emerged as a technologically-forward “cry for help” as governments turn to quantitative easing and free credit to revitalize their economies.

However, excessive printing causes long-term financial instability. Take Japan as an example; the government ran a Q.E. program in the late-1980s, leading to “The Lost Decade” from 1990-2000 — a period defined by decreasing economic output and inflation.

Japan has still not recovered fully, even thirty years after the Q.E. program. Critics say the U.S. is headed down a similar route if additional measures are not put in place.

While Bitcoin and the broader crypto market helps with the above, Forbes called out the massive volatility in BTC markets. In early-June, China’s former central bank voiced similar concerns, stating Bitcoin was a “commercial success” but its volatility meant the protocol was more of a speculative instrument than a serious currency alternative.

Bitcoin’s 21 million supply was also subject to scrutiny, Forbes noted restricting the supply to eventually create value was a mistake on the creator’s part. He explained that money is meant to facilitate commerce, not “control the economy” and impede businesses with scarcity.

When asked about the popularity of Bitcoin in Syria, Lebanon, and Venezuela, Forbes attributed it to overall failed economic structure, not the monetary benefits of BTC by itself.

The three countries are seeing increased Bitcoin adoption since last year. Reports state Bitcoin and Ether are sold at a premium, with several retailers in Venezuela now accepting BTC as payment for everyday produce.

Forbes believes Bitcoin will not see widespread adoption without a political and regulatory struggle. In fact, he points out that cryptocurrencies could never receive permission to operate as widely they can.

His solution? Going ahead with development and project launches while dealing with the implications later on.

On the future of cryptocurrencies, Forbes said the market needs to become “extremely easy” for ensuring adoption beyond the use as a crisis currency. He added measures to control volatility need to be implemented.

To his point, the stablecoin market is booming, and prove to be superior to speculative digital assets in the near future.

Meanwhile, Forbes noted Libra, Facebook’s native currency, or a hypothetical Amazon coin could lead the cryptocurrency market, considering the sheer “brainpower” working on and available, respectively, for the development of digital currencies and related frameworks.