Ethereum, XRP and Litecoin are on the verge of a major trend change

The cryptocurrency industry experienced a large influx of capital over the last 48 hours with the market capitalization surging 37.50 percent. 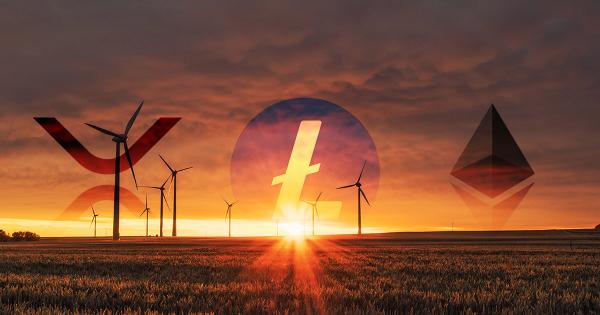 The cryptocurrency industry experienced a large influx of capital over the last 48 hours with the market capitalization surging 37.50 percent. The sudden upswing appears to have been triggered after Chinese President Xi Jinping said that China would focus on blockchain development. Despite the bullish sentiment seen across the entire market, Ethereum, XRP and Litecoin have yet to close above resistance in order to validate the continuation of their uptrend.

Ethereum skyrocketed over 32 percent, but its price has not been able to close above the $198 resistance level. As a matter of fact, this cryptocurrency is contained within a no-trade zone between $153 and $198 since Sept. 24. Breaking outside of this trading range will determine where ETH could be heading next.

Nevertheless, if Ethereum breaks below $153 instead, it could plunge to the next support level around the 113 percent Fibonacci retracement level, $126.

Like Ethereum, XRP spiked up more than 12 percent to reach a high of $0.315. But, the buying pressure behind it was not high enough to take this cryptocurrency to close above the $0.30 resistance level. As a result, XRP moved back into the no-trade zone between $0.24 and $0.30.

Nonetheless, the XRP price movement is contained within an ascending parallel channel that formed since Sept. 26 on its 12-hour chart. Under this timeframe, every time this crypto reaches the bottom of the channel it bounces off to the middle or the top. But, when it reaches the top, it falls back to the middle or the bottom. Now, XRP is trading around the middle of the channel after getting rejected by the top, which could indicate that it will try to hit the bottom.

A spike in the selling pressure behind XRP could push it below the $0.24 support level. This could trigger a major sell-off taking it to the next levels of support around $0.19 and $0.17. However, an increase in volume may allow XRP to break outside of the current trading range where it sits. If this happens, this cryptocurrency could try to hit the next levels of resistance that sit around $0.38, $0.47 and $0.57.

Litecoin is testing the $58 resistance level, which is preventing its price to make higher highs since Sept. 25. Even though the recent bullish impulse took it to hit $64, LTC immediately plummeted below $58.

At the moment, a bullish divergence between the relative strength index (RSI) and the price of LTC can be seen forming on the 1-day chart. Divergences occur when an oscillator such as the RSI disagrees with the actual price movement. Thus, an RSI making a series of higher lows while prices are declining is indicative of an improving trend and the probability for a trend change increases.

If Litecoin is able to close above the $58 resistance level, a move to the next resistance levels around $64 and $71 will be extremely likely. This could also allow LTC to break outside of a descending parallel channel that can be better seen on its 12-hour chart, which would be a very bullish sign. Breaking above this major resistance cluster will add credibility to the idea that LTC is bound for a trend change from bearish to bullish.

However, if the top of the descending parallel channel rejects this crypto from a further upswing, then it could drop to the middle of the channel, around $44. It is worth noting that an increase in sell orders could even take LTC to the bottom of the channel that sits around $39.

Even though the crypto community appears to have turned bullish due to the recent price jump, the market is technically sitting on the verge of a trend change. All of the cryptocurrencies previously analyzed are testing significant resistance levels that could confirm the bullish outlook.

If Ethereum is able to close above $198, XRP above $0.30 and Litecoin above $58, then the market may continue rising to higher highs. But, if instead they these cryptos close below support a steep decline in prices will be very likely.

A bearish technical analysis for Bitcoin, Ethereum, XRP and Litecoin; but what if bullish?