The multichain DeFi project launched its first AMM on Polygon and is now live on the fast-growing OKExChain. 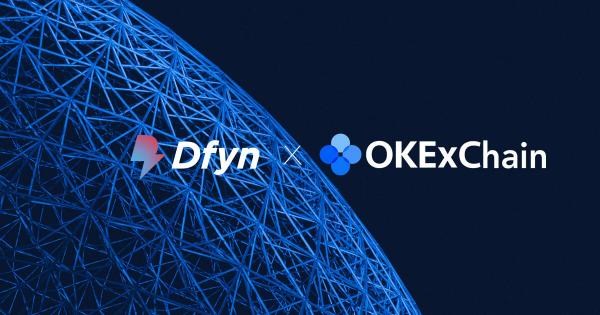 We are thrilled to announce our collaboration with @OKExChain, an exciting blockchain community created by @OKEx ?

Dfyn has launched an AMM node on OKExChain, enabling the official launch of the Dfyn Exchange on the blockchain ?

The Dfyn Exchange will be rolled out on OKExChain in three phases:

With the move, the Polkastarter IDO project—which attracted $200 million in TVL on Polygon just weeks after launch—is now available on two chains (Polygon being the first).

About AMMs and Dfyn’s growth

AMMs are smart contract-based DEXs that allow users to trade cryptocurrencies in a wholly permissionless manner via the use of decentralized liquidity pools (as opposed to the traditional market where buyers or sellers could be centralized).

Most AMMs run on a certain blockchain and allow users to trade cryptocurrencies and tokens related to that particular blockchain. This means an Ethereum-based DEX can only facilitate the trading of Ethereum and other ERC20 assets (and not tokens issued on Tron, Solana, or Binance Smart Chain).

Dfyn is currently in process of expanding the Dfyn AMM to different chains like Algorand, Elrond, BSC, and others. And its launch on OKExChain is part of just that roadmap.

As more DFYN nodes will expand to other popular chains and integrate with Router Protocol’s impending mainnet,  they will communicate with each other and other AMMs as well as various other DeFi platforms that are emerging across various blockchains.

The decentralized exchange was one of the latest IDOs on Polkastarter and has quickly become a success story. 3 min read