The decentralized exchange was one of the latest IDOs on Polkastarter and has quickly become a success story. 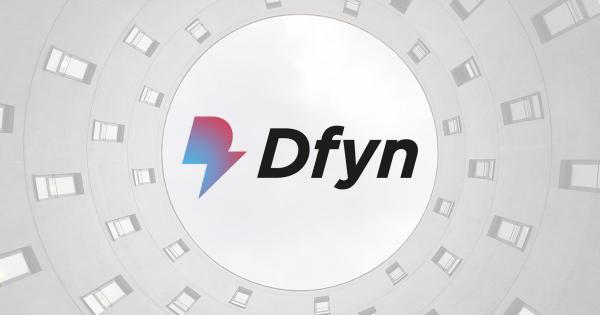 The exchange is currently live on the Polygon network and has emerged as the fastest-growing DEX on Polygon. According to data from CryptoRank, DFYN has emerged as the top-performing Polkastarter IDO of all time with respect to the current IDO returns.

Launched less than a month ago on May 10, Dfyn locked up over $242 million a week after launch and has since seen the listing of over 349 token pairs. Its IDO (short for Initial ‘DEX’ Offering) has emerged as one of the highest-grossing ones as a result—with an 86x return for early investors at peak DFYN prices.

Such growth has, unsurprisingly, attracted grants and partnerships for the young project.

Late May saw the Algorand Foundation, the entity behind the high-speed Algorand blockchain, hand out a grant to the Dfyn team for bringing over cross-chain exchanges capabilities to the Algorand ecosystem and run a full Dfyn AMM node.

The Dfyn team is currently working on a three-phase process to deploy Dfyn on Algorand (writing the code from scratch as Algorand is non-EVM compliant) and later porting the network to Router Protocol’s existing ‘bridge’ contracts.

In terms of partnerships, the ever-growing Elrond Network onboarded Dfyn to its own network last month, allowing Elrond-issued assets to be traded via the latter’s interface.

“The Elrond infrastructure is essential for high bandwidth and inexpensive DeFi ecosystem. Cross-platform growth will enable projects to engage in a positive-sum game and share the upside of adoption outside of the current crypto boundaries,” said Beniamin Mincu, CEO of Elrond Network, at the time.

Yet another partnership in May saw Dfyn partner with Terra Money for the latter’s expansion to the Polygon Network. Terra is PoS blockchain network built on the Cosmos network consisting of a suite of fiat-pegged stablecoins that are collateralized by the native staking and governance asset of the network, LUNA, which has an elastic supply to help maintain the price pegs of those circulating stablecoins.

As part of the collaboration with Terra, Dfyn will be hosting liquidity farms for TerraUSD—offering yields for users staking in UST pools. Dfyn will additionally set up a node on Terra, expanding liquidity for the latter’s users.

AMMs, for the uninitiated, are smart contract-based DEXs that allow users to trade cryptocurrencies in a wholly permissionless manner via the use of decentralized liquidity pools (as opposed to the traditional market where buyers or sellers could be centralized).

Most AMMs run on a certain blockchain and allow users to trade cryptocurrencies and tokens related to that particular blockchain. This means an Ethereum-based DEX can only facilitate the trading of Ethereum and other ERC20 assets (and not tokens issued on Tron, Solana, or Binance Smart Chain).

Dfyn is currently in process of expanding the Dfyn AMM to different chains like Algorand, Elrond, BSC, and others. Once Dfyn nodes are launched on all the chains, Dfyn will leverage cross-chain capabilities developed by Router Protocol to enable cross-chain swaps and smart order routing. It should also be noted that Dfyn and Router Protocol are built and managed by the same team.

The project has zoomed to a $35 million market cap since its launch in May. DFYN trades at $3.5 at press time.

Disclaimer: CryptoSlate holds a financial position in Dfyn. CryptoSlate was given the opportunity to participate in the private sale of Dfyn in exchange for news and other types of coverage. CryptoSlate was not paid for this article.

Understanding the hype behind Polkastarter, the latest fundraising craze in crypto