The risk-off narrative takes shapes as global uncertainty takes hold, this spells trouble for crypto and stocks while the dollar benefits. 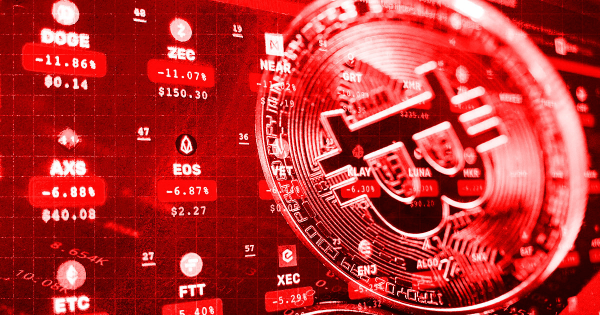 It’s a red day for crypto markets with only 0X and ApeCoin managing to buck the trend. Dogecoin leads the most significant losses of the top ten, down almost 10%.

The story is much the same with stocks. Reuters reported tumbling Asian stock indices as Europe rises in preparation for trading to open on April 27.

The decline is explained by “growing fears” stemming from economic uncertainty, with investors cycling into risk-off assets, including the dollar and government bonds, as a response.

“Most Asian stock indices fell on Wednesday, as growing fears over the global economy drove investors to dump riskier assets in favour of safe havens such as the U.S. dollar and government bonds.”

The correlation between Crypto and stocks is hard to deny

Recent data shows the 40-day correlation between the market leader, Bitcoin, and the tech-heavy Nasdaq, hitting 0.6945 – the highest level since records began.

The report adds that Bitcoin and the Nasdaq have tended to move in sync since the health crisis. But more recently, the pair are “now in unison more than ever.”

The mirrored movements contradict the narrative that crypto is a safe haven or a hedge against economic downturns.

Financial markets are contending with multiple risk factors, including the likelihood of the Fed aggressively hiking interest rates, a slowdown in China, surging global inflation, and the conflict in Eastern Europe.

Head of Market Research at Bitcoin Magazine, Dylan LeClair said the markets are behaving per “a global deleveraging event.”

A global deleveraging event is in progress, for those that are not yet aware.

Develervaging is where entities attempt to lower their total financial leverage, meaning to reduce debt. It could take the form of selling assets or cutting costs, which spells trouble for risk-on asset prices.

“The most direct way for an entity to deleverage is to immediately pay off any existing debts and obligations on its balance sheet. If unable to do this, the company or individual may be in a position of an increased risk of default.”

The DXY goes on a tear

The DXY measures the U.S. dollar’s value relative to its most significant trading partners. This is distinct from the loss of purchasing power through inflation. In other words, global currencies are losing purchasing power, but the dollar is faring better relative to others.

As macroeconomic conditions deteriorate, expectations are the Fed will lift interest rates to combat inflation. The anticipation of higher interest rates, which would lead to higher yields on U.S. government bonds, is a pull for investors to cycle into the dollar and away from riskier assets, including crypto.