Crypto exchanges' Super Bowl ads get panned by The Verge for missing the mark. 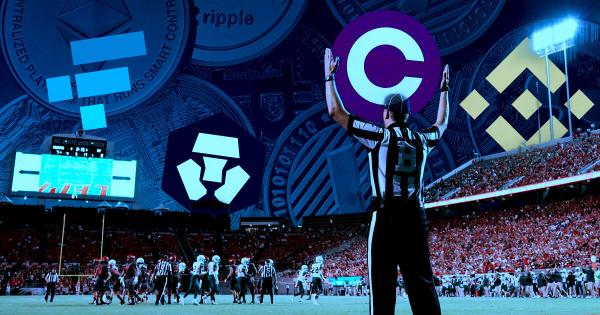 The Verge says this year’s flood of Super Bowl crypto ads did little to advance the space in any meaningful way. Instead, they deem it a wasted opportunity focused on style over substance.

Crypto history in the making

Much was said about Super Bowl LVI being crypto’s moment in the spotlight. With Coinbase, FTX, Crypto.com, and Binance forking out tens of millions collectively to air television ads in the hopes of gaining recognition and mainstream acceptance.

This was the first time crypto firms had advertised at the biggest U.S sporting event on the calendar. It represented a huge opportunity to get the masses onside with digital assets.

The viewing figures are in, and in line with expectations, a staggering 112.3 million people tuned to watch the Los Angeles Rams beat the Cincinnati Bengals 23-20.

But, as the dust settles and the event gets dissected, not everyone is convinced the crypto firms managed to pull it off. The Verge says the focus on persuading viewers to buy crypto, over “anything else,” was a missed opportunity.

“none of the cryptocurrency commercials at the big game made any attempt to actually sell people on anything other than spending more money on crypto.”

Landing this message was a string of A-list celebs, including LeBron James and Matt Damon, which The Verge said only added to the meaningless hype.

What’s more, Coinbase’s ad, which showed a QR code bouncing around the screen, was met with a mixed response. While some lauded it as a marketing hit, even a genius move, others said it normalized scammer’s behavior. Either way, the ad worked, prompting 20 million visits to the Coinbase website in a minute.

However, in a serious under-estimation on the part of Coinbase, the traffic crashed their website, mimicking past instances of connectivity issues experienced in times of extreme market volatility.

In a blunt reaction to Crypto Bowl, The Verge said the whole thing was about promoting the idea of buying now; otherwise, viewers would miss out – in short, soliciting FOMO.

“If this year’s Super Bowl was meant to be the blockchain’s big public debut, it was remarkably short on pitches that explain what cryptocurrency technology will actually do or how it’ll improve things in users’ day-to-day lives.”

The opportunity cost of going this route meant disregarding a more fundamental message while at the same time giving off Ponzi scheme vibes.

What is VVS Finance, the largest project on Crypto.com’s Cronos chain?