The U.S. wants to understand how crypto is impacting sanctions enforcement and take strong measures to prevent evasion. 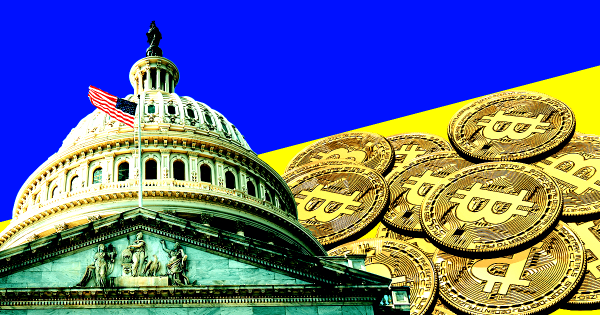 As the U.S. grows increasingly concerned about sanctions evasions via cryptocurrency, a new bill demands that Congress be notified of all crypto aid provided to Ukraine.

The bill, which the House of Representatives deliberated on Sept. 19, has been titled “Russia Cryptocurrency Transparency Act.”

The bill asks for the appointment of a Director of Digital Currency Security in the office of Economic Sanctions Policy and Implementation of the DOS. The Director will assess how cryptocurrencies impact the U.S. sanctions regime and develop and implement sanctions policies resilient to crypto.

The bill asks the DOS to submit a report explaining why it chose to pay out rewards in cryptocurrency. It also requires the report to contain a list of all crypto rewards already paid by the DOS. The report should include evidence that explains why crypto payments make it more likely for whistleblowers to come forward than the U.S. dollar, according to the bill.

Additionally, the report tasks the Secretary of State with determining how the State Department’s use of crypto impacts the dollar’s status as a global reserve currency and if it could lead to more funds being used for illicit activities.

The bill also requires a report on the role of crypto and blockchain in providing humanitarian aid to Ukraine and promoting economic development. According to the bill, the report should include how blockchain and crypto can assist in providing support or resettlement of Ukrainian refugees and increase efficiency, accountability, and transparency in aid provided to Ukrainians.

The fear of Russian sanctions evasion

Additionally, the bill requires the Secretary of State, in consultation with the Secretary of the Treasury, to submit a report on the extent to which digital currencies can impact the effectiveness and enforcement of U.S. sanctions against the Russian Federation.

According to the bill, the report should include descriptions of efforts by the Russian Federation to use crypto and Web 3.0 tools to evade sanctions. It should also include an assessment of how the use or adoption of crypto could undermine national security, sanctions, and anti-money laundering efforts.

Furthermore, the bill’s text states that the report should also include actions taken by the U.S. to work with the private sector in combating sanctions evasion.

Lawmakers specifically asked crypto exchanges to comply with the sanctions and cut off service to all sanctioned targets. While some crypto exchanges were initially hesitant, they eventually bowed down. But a Chainalysis research showed that there is a lack of evidence to suggest crypto is being used to evade sanctions.

Could Gitcoin Grants address be under sanctions from the U.S. amid Tornado Cash saga?