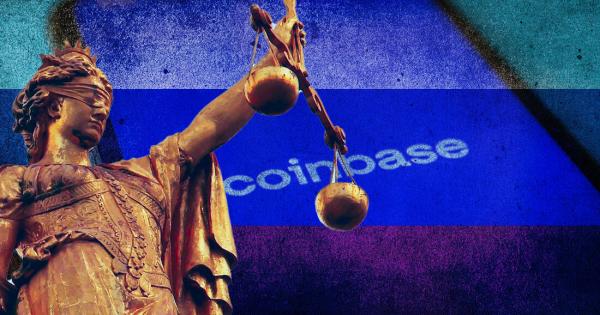 Coinbase will not be instating sanctions against its Russian users, its CEO Brian Armstrong said earlier today.

“Some ordinary Russians are using crypto as a lifeline now that their currency has collapsed. Many of them likely oppose what their country is doing, and a ban would hurt them, too,” he said in a tweet.

Coinbase has principles but will yield to the U.S. government if it has to

However, Armstrong noted that while Coinbase won’t act of its own accord, it will impose bans and sanctions if required by the U.S. government. He said that every company registered in the U.S. has to follow the same set of laws.

“It doesn’t matter if your company handles dollars, crypto, gold, real estate, or even non-financial assets. Sanctions laws apply to all U.S. people and businesses.”

That’s why thinking that crypto businesses like Coinbase won’t follow these sanctions laws would be a mistake, he explained.

Armstrong said that the exchange already has a thorough screening process for all new users that sign up for the exchange. The exchange also blocks transactions from all IP addresses that might belong to sanctioned individuals or entities and is constantly checking its user database against global watchlists.

When it comes to the ongoing Ukraine crisis, Armstrong said that Coinbase shares the belief of the U.S. Treasury and NSC that there is currently no risk of Russian oligarchs using cryptocurrencies to avoid sanctions.

“Because it’s an open ledger, trying to sneak lots of money through crypto would be more traceable than using U.S. dollars cash, art, gold, or other assets.”

That’s why Coinbase won’t be preemptively banning Russians from using its platform. Armstrong said that the company believes everyone deserves access to basic financial services unless the law says otherwise.

That being said, he noted that Coinbase will instate bans and sanctions against Russian users if required by law. If the U.S. government decided to impose a state-wide ban on U.S. companies servicing users from Russia, Coinbase would follow those laws.

9/ Sanctions are a complex issue, and the situation is changing fast, so we’ll keep working with law enforcement and governments, and will take more steps as needed. We'll also of course keep working to enable crypto services for the people of Ukraine who are in need of help.