The Bitcoin blockchain has enjoyed a fresh influx of network activity following the large upswing seen on Oct. 25 and 26, which brought the price of BTC from $7,300 to $10,600 in under 24 hours. An on-chain analyst says that these signals could be a sign that bears are losing control of the market.

Bitcoin’s rally this weekend was accompanied by a notable increase in the use of the Bitcoin network, according to Charlie Morris, founder of crypto analytics site ByteTree.

His site’s metrics show that as of Oct. 26, Bitcoin fees paid by transactors have increased by 43 percent, the value of cryptocurrency sent had surged by 66 percent, and network velocity has hit 747 percent. Morris told a trade publication earlier this week that velocity is a “tracker of how actively each [coin] moves through the economy”

Morris remarked in his message accompanying these statistics that if these readings are kept up, “the bear will be put to rest.” 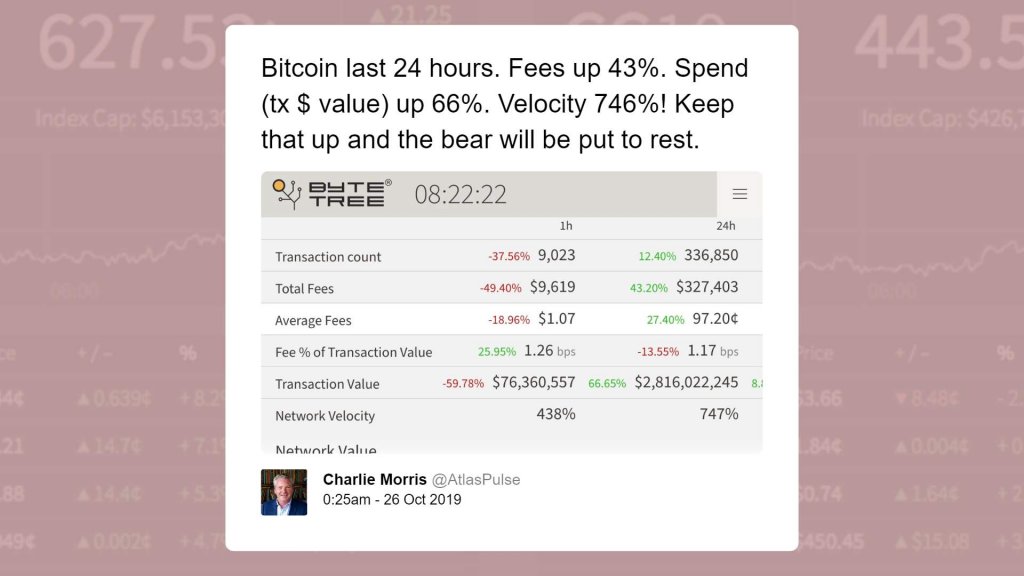 Morris’ use of on-chain analytics to try and determine the cryptocurrency market’s direction is similar to the thesis of Adaptive Capital’s Willy Woo, who has become known for using on-chain metrics to predict price action.

The case for a Bitcoin bull run returns

Yet, it isn’t only on-chain metrics that show Bitcoin is gaining bullish momentum. A number of popular analysts have corroborated the idea that the cryptocurrency bear has been put to rest by pointing to technical and fundamental factors.

Alex Krüger, for instance, said in the wake of the move on Oct. 25 that “technically, BTC bear trend is over,” referring to the downward price action that brought Bitcoin from $14,000 to $7,300 over four months.

Indeed, the recent thrust higher by Bitcoin to tap $10,500 has had a swath of positive implications for BTC’s technical indicators. An analyst recently broke these implications down, writing:

On the fundamental side of the market, Bakkt’s Bitcoin futures have set a new daily volume record of 1183 contracts, which equated to around $10.3 million worth of trading. These relatively high volumes are not yet a trend, yet may show increasing institutional interest in cryptocurrency.