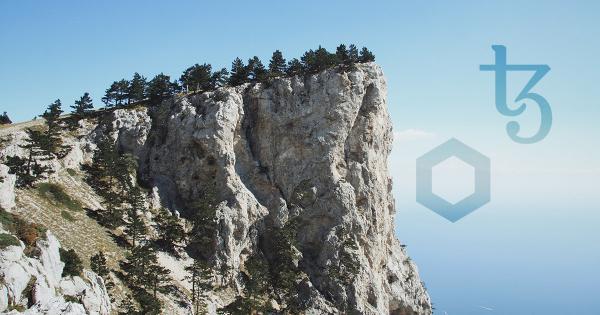 During that time, two altcoins managed to break the mold, rallying as the rest of the cryptocurrency market stagnated: Tezos (XTZ) and Chainlink (LINK), the 10th and 12th largest cryptocurrency by market capitalization, respectively.

The assets were doing well, so well that at the recent highs, LINK had gained a jaw-dropping 158 percent from the March capitulation lows. XTZ posted a performance almost identical (down to the day-to-day trajectory and performance gains) to LINK, as can be seen in the chart below.

A good portion of those gains transpired last week, with Tezos rallying 28 percent in a matter of three days.

But, goods things have to come to an end.

On Apr. 27, as can be seen in the screenshot below, the two cryptocurrencies had started to retrace, underperforming Bitcoin instead of outperforming it. They were down five percent on the day, which is quite weak compared to BTC’s two percent gains seen on the same day.

Although the cryptocurrencies have begun to bounce back on Apr. 28, analysts believe that altcoins — Tezos and Chainlink included — are poised to continue to underperform, at least against Bitcoin, in the days and weeks ahead.

As reported by CryptoSlate previously, there are tell-tale technical and on-chain signs that Chainlink is soon going to be subject to a bearish reversal.

One pseudonymous trader, for instance, shared that the cryptocurrency has been trading in a rising wedge, has been rejected at the $4.00, and has seen dropping trading volumes — a confluence of signs suggesting an imminent 20 percent drop.

And data from IntoTheBlock showed that there’s a strong bid-ask volume imbalance, with there being much more selling pressure than bullish volume at the moment, indicative of a distribution pattern near a market top.

Tezos could follow LINK lower in the coming days.

Case in point: top analysts shared bearish sentiment when observing XTZ’s chart, with trader Teddy Cleps proposing a retest of $2.50 in the coming days after the strong drop today, and another analyst writing:

“This thing looks gassed from a quick, 2-second look. Dump it.”

The whole altcoin asset class is poised to underperform

While it may seem like LINK and XTZ are being singled out, analysts expect all altcoins to underperform in the near future.

A trader with the moniker of “Pentoshi,” who works for crypto research firm Blockfyre, recently remarked that he is reducing his exposure to altcoins because he believes Bitcoin’s block reward reduction will cause volatility that results in altcoins “getting rekt.”

The analyst continued that from how he sees it, altcoins are always a “game of musical chairs” as the reasons they are rallying, Pentoshi explained, are all “red flags,” not fundamental developments:

“The reason the alt pumps are unconvincing is because they have followed the same patterns. IEO’s, Interoperability, privacy coins moving together. It’s coordinated as it has been the last 3 years instead of all ships rising together.”

He wrote in the company’s March newsletter that Bitcoin will probably out-perform other tokens for a while because the cryptocurrency, unlike altcoins, is entrenched and has an established and broad user base and developers:

“It’s a project that’s already built, it works, it has an 11-year track record. Many newer blockchain and smart contract projects are still in development and might be stressed to raise funding to complete their development.”

The same newsletter saw Morehead suggest that within the coming 12 months, there is a high likelihood Bitcoin will hit $20,000 and then hit a new all-time high, citing how the vast amount of money-printing by central banks and governments will simply cause all asset prices to float higher, BTC especially.

Like other cryptocurrencies, Chainlink has embarked on a stunning recovery over the weeks since March’s capitulation event on March 12th.