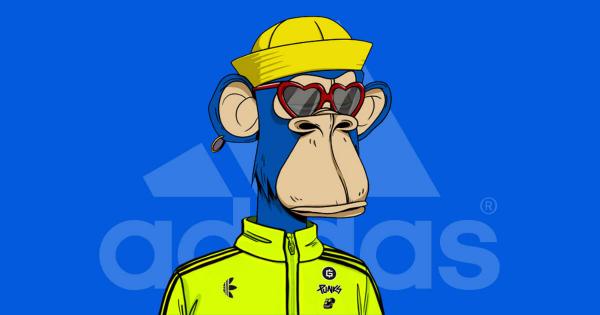 After weeks of flirting with projects in the non-fungible token (NFT) space, one of the leading clothing brands in the world, Adidas, has now stepped into the space in style as it purchased a Bored Ape Yacht Club NFT while also scoring a number of partnerships within the space.

Adidas has revealed its new NFT, which was discovered to be Bored Ape Yacht Club NFT #8774 that it has named Indigo Herz and could be seen wearing an apparel with the brand’s logo. The revelation was completed with a video teaser of the collaboration between Yuga Labs, the creator of Bored Apes NFT, and the leading clothing firm.

Apart from its partnership with Yuga Labs, the firm is also partnering with other NFT-related projects like Gmoney, who is a renowned NFT collector, and Punk Comics, an NFT derivative project that was inspired by CryptoPunks.

The video trailer shows the alliance with its numerous partners as 3D avatars related to Gmoney alongside an original Punks Comic character plus its newly purchased Bored Ape NFT entering into a virtual world adorned with the Adidas logo.

While speaking on the partnership, a representative of Adidas disclosed in a Twitter Spaces conversation that the project took five months of meticulous planning. The Punks Comic team, on the other hand, revealed that its next issue of the NFT comic would feature Adidas’ Indigo Herz.

The Bored Ape Yacht Club is one of the most sought-after NFT projects in the space. The NFTs are a collection of 10,000 unique avatars that have been sold for millions of dollars. According to CryptoSlam, the project has cumulatively raked in over $1 billion in sales since its launch earlier this year.

One distinct feature the NFT project has is that it gives its owners commercial rights to their respective avatars, letting them create and sell derivative projects, physical goods, and more.

This could be what has spurred several patronages that the project enjoys from celebrities like Post Malone, Dj Khaled, Timbaland, and even institutional investors like the popular record label, Universal Music Group and most recently, Adidas.