For the longest time, Ethereum has been the king of smart-contract blockchains. 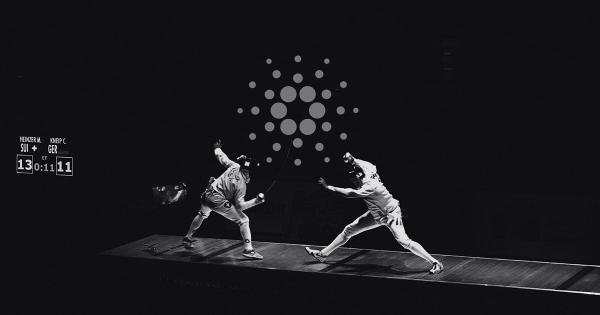 For the longest time, Ethereum has been the king of smart-contract blockchains.

As CryptoSlate sector data indicates, ETH’s market capitalization is an order of magnitude higher than that of the second-largest smart-contract crypto, Cardano (ADA). The difference between Ethereum and its peers is further pronounced when you look at metrics like active users, confirmed transactions, and transaction fees paid.

Chris Burniske, a partner at Placeholder Capital, shared the image below in December, showing the aggregate mining fees paid on Ethereum versus those paid on Tezos, Waves, and Lisk.  As can be seen, the latter three networks have collected less in aggregate than $500,000 in mining fees while Ethereum has collected in excess of $70 million.

Not to mention, Ethereum has seen strong adoption from some of the world’s biggest companies while other blockchains haven’t.

Yet, the introduction of Cardano’s “Shelley” era will change this, with one prominent CEO saying that competition is needed.

At long last, after years of development and months of testing and optimizing, Shelley is finally here.

For those that are unaware, Shelley is Cardano’s next phase of development, similar to how there is Ethereum 1.0 (current) and Ethereum 2.0, which is currently in development. As the Cardano Foundation describes Shelley on its site:

“Shelley will also see the introduction of a delegation and incentives scheme, a reward system to drive stake pools and community adoption… Come the end of the Shelley era, we expect Cardano to be 50-100 times more decentralized than other large blockchain networks.”

Confirmed at the Shelly Virtual Summit, a digital conference dedicated to the upgrade, code for Shelley was released.

Deployed on Jul. 1 is node software that contains all of the Shelley features that will go live when a hard fork occurs at the end of July.

Also confirmed at the event is that Coinbase will eventually support ADA staking.

Commentators on the space are optimistic about the upgrade.

Bill Barhydt, the chief executive of Abra and a former Goldman Sachs and CIA employee, commented on the Cardano upgrade and what it means for the rest of the cryptocurrency space in a Jul. 2 blog:

“Many are super bullish on the project and expect great things while others consider the project vaporware such that any failure to deliver would result in a precipitous drop in the token’s value. My take is that competition in the cryptocurrency space is always a great thing and is exactly what we need to accelerate the pace of adoption and improvement.”

This Week in Crypto – Newsletter now out. Topics include:

Join us for our next AMA tomorrow (Friday) at 9AM PT on our YouTube channel.https://t.co/r9vke3YPOm

Founder of the blockchain, Charles Hoskinson thinks this is the case. He said to Messari‘s chief executive Ryan Selkis that Ethereum may soon feel pressure from Cardano due to the upgrade.