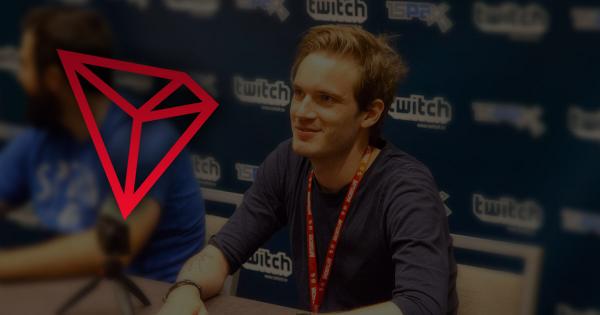 Because many of Kjellberg’s videos are demonetized by Youtube, he often gets sponsors. Normally the sponsors are relatively “normal”—energy drink GFuel or computer hardware company Origin or phone company Honor—but just last week, things took a weird turn. A crypto- and blockchain-related turn.

In April of 2019, Kjellberg made an interesting announcement in an edition of his flagship show, “Meme Review,” during which he reviews memes, often resulting in their “death” due to subsequent overuse: he partnered with DLive, a blockchain-centric streaming platform looking to rival Twitch by allowing creators to take more control of their revenue.

As the Youtuber then explained:

“DLive is built on the modern blockchain, providing a disruptive solution for the industry… DLive’s mission to empower creators… through their revolutionary reward system.”

At the time, it seemed that was that—PewDiePie started streaming on the platform, advertising his live casts on Twitter, but made no mention of DLive’s blockchain integration or what it meant for him, other creators, or his viewers.

But, this changed last week when the Youtuber released a video entitled “Designs that will make you MAD!” Opening the video, he took some time to mention DLive topically for the seeming first time since April:

To celebrate DLive joining BitTorrent Family, we’re giving away a PewDiePie Chair… But Felix, who’s BitTorrent? Well, BitTorrent is the biggest peer-to-peer, file-sharing network in the world, powered by Tron blockchain, which means they have over 100 million users.

Yes, that’s PewDiePie mentioning Tron and affiliated company BitTorrent, which he claimed to have “over 100 million users.”

So how did DLive get the world’s biggest independent content creator to utter the words “Tron” and “blockchain ” in quick succession?

Well, at the turn of the year it was revealed that BitTorrent got DLive to “join its ecosystem” by merging the latter’s account system with BitTorrent to integrate the communities and drive traffic.

Tron founder Justin Sun noted that this collaboration is pertinent because of Youtube’s seeming attack against crypto content creators.

With PewDiePie signing a presumably multi-million-dollar deal with DLive, the fact that it effectively joined BitTorrent was likely something he was contracted to mention. Whether or not that makes him an apologist for altcoins, though, isn’t clear.

This is not the first time the sometimes controversial content creator has dabbled in cryptocurrency.

In 2018, as the initial coin offering boom was still ongoing, PewDiePie took part in a promotional video for a cryptocurrency project, shilling something called SGamePro in a one-minute advertisement. In the spot, he quipped:

“[This is a] wonderful place where you can mine crypto-tokens by playing some of the world’s most popular mobile games. Play. Mine. Earn… Winners [of the games] get rewarded with highly-liquid ERC-20 tokens, which can be converted into other cryptos. “

This video never made it to the PewDiePie channel, but it was uploaded by the SGamePro team likely in a bid to draw traffic to its product.

But alas, the sponsorship didn’t work. Unlike DLive, SGamePro is seemingly a dead project, with the company’s official Twitter account not posting any messages since April of last year, when it announced that PewDiePie had forayed further into blockchain through DLive.

History repeating itself would suggest that DLive, BitTorrent, and Tron may eventually close up shop, for Kjellberg’s uncanny ability to murder memes might just apply to blockchain projects too. That’s what Bitcoin maximalists are hoping for anyway.

Founded with a leading peer-to-peer sharing technology standard in 2004, BitTorrent, Inc is a consumer software company based in San Francisco. Learn More