Verge (XVG) prepares for a hardfork that could impact its price 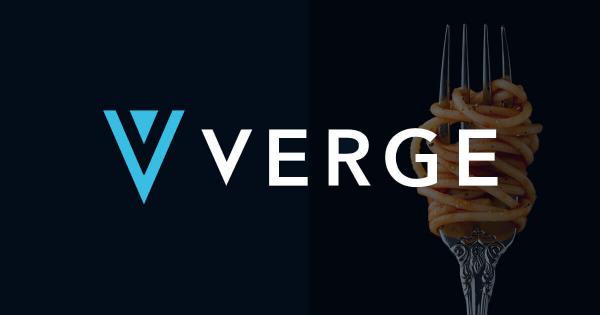 Privacy-centric Verge (XVG) is preparing to conduct a hard fork that would change the way its halving is structured. As the amount of XVG that can be mined over time is limited, its price could be significantly impacted.

Verge is a cryptocurrency designed for people who value their privacy. It improves upon the original Bitcoin protocol by using multiple anonymity-centric networks, such as Tor and I2P. These features provide a fast and decentralized way of transacting while keeping data private.

Recently, the firm behind this privacy coin announced that a hardfork would take place on block 3,700,000, around mid-December. The idea behind it is to add seven new halvings to the network.

The current circulating supply of XVG is at 16,057,283,589 tokens nearing the total supply of 16,555,000,000. As a result, the new difficulty adjustment would give the Verge team around “four more years” to add utility to the token and make strategic decisions.

In a blog post, Swen van Zanten, one of the leading developers at Verge, said:

“The first phase of our feature will basically establish more time for us to prepare more and more stuff for future usage, while we maintain the usability and economy of our currency.”

Under the current distribution schedule, all Verge tokens would have been exhausted at block 4,248,000. Therefore, XVG would have hitten its maximum supply sometime in May 2020. The problem with that is that miners would make nothing but transaction fees. And, van Zanten believes that a significant number of miners would opt-out under this model since they would not contribute hashpower for free.

“If [miners] go from making 730 [XVG] per block, to making 1 or 2 coins maximum, or sometimes 0 coins if the block is empty, they are going to go away. They are simply going to take their hashpower and go mine something else that is more profitable. And, this could create all sorts of problems for Verge’s blockchain.”

The new hardfork would allow Verge to maintain its protocol healthy by keeping miners profitable while securing the network. This upgrade could have an impact on XVG’s price since it reduces its supply distribution.

Over the last week, Verge saw its price surge over 50 percent from a low of $0.0036 on Nov. 12 to a high of $0.0055 on Nov. 15. Based on the 1-day chart, the 150-day moving average served as a strong level of resistance preventing XVG from going higher. Since then, this crypto pulled back over 18 percent and is now trading around the 38.2 percent Fibonacci retracement level.

The 4-hour chart shows that the recent correction appears to be contained within a descending parallel channel. If the selling pressure continues to increase, XVG could remain trading within the channel to hit the 50 percent Fibonacci retracement level, around $0.0042.

Nevertheless, a spike in volume could take Verge to break out of the descending parallel channel in an upward direction. If this happens, then XVG could push for higher highs considering that the channel is part of a bull flag.

This type of technical formation is considered a continuation pattern. As Verge surged to nearly $0.0055, it formed the flagpole. And, the current consolidation period could be creating the flag. An increase in demand could result in a breakout in the same direction of the previous trend.

By measuring the height of the flagpole, this technical pattern estimates a 32 percent upswing upon the breakout point. If validated, Verge could rise to $0.0060. A candlestick close above the 150-day moving average on the 1-day chart could be used as confirmation of the bullish formation.

As Verge prepares for a hardfork in mid-December, the team encourages those using the Core Wallet to upgrade to V6. Meanwhile, for those who keep their XVG tokens on exchanges or third-party online wallets may not have to worry about the update. These service providers would likely monitor the chain fork and choose the longest chain as the standard.

The new upgrades to the Verge protocol would likely be felt on the price of this cryptocurrency. At the moment, it seems like a bullish impulse would have the potential to take it to $0.0060. Conversely, a spike in sell orders could take this crypto to $0.0042.

Justin Sunerok, the founder and lead developer for Verge Currency, joined CryptoSlate for an interview yesterday.

Bitcoin has been facing steep selling pressure over the past 24-hours that has marked an extension of that which was first incurred when it broke below $9,000 earlier this month — a previous support level that BTC bulls had been ardently defending.

Crypto analyst Willy Woo said that very few coins are good investments, as data from CoinMarketCap has shown that only the top 40 out of the 4987 listed coins are liquid.