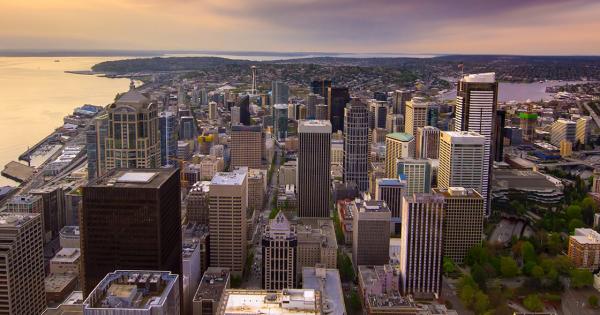 Photo by Kyler Boone on Unsplash

Jonathan G. Blanco hosted the first Token Forum Seattle on Aug. 9 at the Columbia Tower Club, bringing together a group of crypto industry leaders, experts and advocates for a deeper look into blockchain’s most important topics.

Featuring panoramic 76th-story views of Seattle and over 200 blockchain and crypto enthusiasts, an event of this caliber was long overdue for the city and promises to be the first of many for the region.

The inaugural event focused on advanced topics and was geared toward blockchain industry professionals. By targeting a savvier audience, there was a strong emphasis on creating networking opportunities.

Some of the key topics discussed and recurring themes that emerged from the informative day included:

Quite the mouthful, self-sovereign identity (SSI) breaks down into three related but separate categories: security, identity, and ownership.

One problem with the current state of security is the tendency for companies to aggregate one’s data into a single place. This method of data storage not only makes one’s personal information vulnerable but also highly lucrative to potential hackers.

For example, in the Equifax hack that affected over 140 million Americans, the perpetrators accessed sensitive data including names, date of birth, Social Security numbers, home addresses, tax IDs and driver’s license details from one successful breach.

One contributing factor to hackers’ success is the rigidness of current identity systems. Instead of verifying identity while divulging the minimum amount of personal details, one has to fork over multiple, all-encompassing documents.

However, if identities could be separated, companies would only have the necessary information to identify its customers, making individual hacks much less profitable and information more secure. Self-sovereign identity would return the ownership of personal data back to individuals, not companies.

Companies such as Google and Facebook profit massively from user data while also controlling the data associated with each account. If someone wants to leave Facebook, he or she can’t take all their pictures, comments and related information with them.

Companies such as LifeID, meanwhile, are working to build a decentralized identification system that could circumvent some of the problems discussed. The potential of blockchain to solve identity issues, as well as provide different avenues of value, has also captured the attention of U.S. Rep. Derek Kilmer and Dr. Joseph Williams, who were in attendance and spoke on panels.

Given crypto’s wild volatility, the poor performance of most ICOs and its complex jargon, it is easy to understand why the average person may be turned off by cryptocurrencies. Despite all this, there is a lot of value that cryptocurrencies can deliver to everyday people and communities.

The key to unlocking that value is clear communication, ease of use and policy development and regulation.

According to Alexsandra Guerra of Nori, a blockchain company focused on climate change, communication starts with the why. “Why are you pursuing the project you are? Why should they care?”

Dr. Williams, Washington’s director of economic development for the information and communication technology sector, shared that sentiment. He asked, “what’s the problem you’re trying to solve?” Once the answer is clear, it doesn’t matter if people understand how it works under the hood, as long as the solution is functional and it solves that problem.

Functionality and ease of use will also be a major factor in mainstream adoption. Despite using gamified micro-tasks to reward more than $2.6 million to over 100 countries worldwide, Simon Yu, CEO of Storm, briefly spoke about some of the hurdles users currently face to cash out rewards.

According to Yu, after being rewarded Storm for completing a micro-task, users must transfer the tokens to an exchange like Binance or Bittrex, exchange Storm for BTC, then send that BTC to an exchange like Gemini or Coinbase to sell for their native currency. In an ideal scenario, users would be able to turn Storm into money in one step, and they may be able to do so soon with new Bittrex altcoin/USD ramps. As functionality improves, it’s reasonable to expect more adoption will follow.

Blockchain has already shown its real-world efficacy. Lawrence Lerner, CEO of Pithia, a blockchain-focused venture capital group, pointed out that Shenzhen, China, is using blockchain as a legal tool to record evidence in trials; meanwhile, Dr. Williams provided the example of Estonia storing sensitive information on a blockchain to protect itself from potential Russian attacks. They proposed that one day, blockchain technology could also provide ways to improve voting.

Rep. Kilmer, who serves on the Washington State Congressional Blockchain Caucus, said the next step for blockchain is proper policy development and regulation. Ultimately, policy and development should happen with the developing space, not to it.

In turn, this will ensure that the U.S. remains a leader in cutting-edge technology and keep its citizens competitive in a rapidly changing environment, a sentiment shared in the comments on the Cboe Bitcoin ETF proposal the SEC shared.

Overall, if companies working in the space can continue to improve their products and clearly communicating use cases to the public and government representatives, blockchain technologies can make a tangible impact in the near future.

Darren Marble, CEO of CrowdfundX gave a riveting speech on the future of security tokens. In his view, security tokens are a new financial instrument with benefits that include:

With the rise of security tokens, Marble predicted a transition from unregulated ICOs to full-regulated STOs. In his view, ICOs have become negatively associated with scams. Although STOs will take longer to raise capital, they will better protect investors and ensure real products are created.

Promising ICOs like EVERY* still exist; but Marble’s beliefs warrant strong consideration given the track records of many failing ICOs.

Marble ended his presentation with the conclusion that, instead of setting up crypto companies in jurisdictions like Gibraltar and Malta, as suggested by Rahul Sood, CEO of eSports company Unikrn, STOs are the American way to create real and impactful blockchain-based companies.

Stablecoins, otherwise known as cryptocurrencies issued 1-to-1 against traditional fiat money, have been a topic of controversy. While companies like Tether have been accused of manipulating the BTC market with excessive printing, stablecoins provide a quick and free way to transfer money.

Providing a real-world example, Kory Hoang, CEO of Seattle-based Stably, shared a story of sending money to his cousin in Vietnam. While he originally would send $400-$500 through Western Union, losing $12 in transaction fees each time, he soon discovered Tether, which allowed him to send money to his cousin quickly and for free. Seeing the power of stablecoins, Hoang soon thereafter founded Stably.

Hoang’s anecdote clearly demonstrates the power of stablecoins to quickly transfer money. However, serial entrepreneur and founder of WorkCoin Fred Kreuger, went one step further, boldly stating that stablecoins would make Bitcoin obsolete and that they were the future of cryptocurrency.

While his statement would be considered heresy to many crypto enthusiasts, he argued that stablecoin’s stability and ability to scale were far superior to Bitcoin and Ethereum.

Despite the negative sentiment generated in the crypto bear market, the Token Forum demonstrated that blockchain is here to stay and that innovators, educators and legislators must continue to work together to build the future.

“We started Token Forum with the hypothesis that those in blockchain wanted a more intimate conference experience  focused on advanced level content and directed peer networking. I feel humbled by the validation we received from our participants and speakers who loved our model. I am so excited for our next event on November 9, 2018 and so are our Forum members who have already purchased half of Super Early Bird Tickets for our next event.”

With its tradition of innovation, from Boeing to Microsoft to Amazon, Seattle is now solidifying itself as a worldwide blockchain hub. Home to a wide variety of crypto companies–including Bittrex, Storm and Dragonchain, as well as a host of many startups–Seattle will definitely be a city to watch in the global blockchain evolution.

The next Token Forum will be on Nov. 9, 2018 at the same iconic location, the Columbia Tower Club in Seattle. For more information, visit https://www.thetokenforum.com/

For more information, watch the video below: