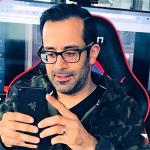 Rahul Sood Verified - Rahul Sood has verified that all information present on this page is factually accurate.

Unikrn, Co-Founder & CEO Razer, Advisor to the Board of Directors Vrvana, Investor and Advisor

A serial entrepreneur, Sood spent 18 years in multiple startups prior to joining Microsoft. He founded luxury and gaming computer manufacturer VoodooPC, which was acquired by Hewlett-Packard. Voodoo brought the ENVY and OMEN product lines to HP, contributing advanced technologies such as commercial liquid cooling and an increased focus on design.

Sood is a Co-Founder of BrightSquid Medical, BrightSquid Dental, and BullsOnWallstreet. Sood sits on the board of advisors for Razer, and he recently joined the Board of Advisors for BitGold. He is active in the entrepreneurial community, helping and mentoring a variety of startups.