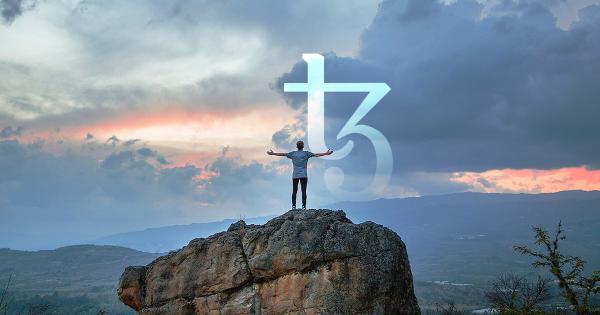 The Tezos Foundation launched a cryptocurrency faucet to incentivize developers to build their smart contracts on top of the Tezos protocol. Meanwhile, several technical indicators estimate that XTZ is bound for an upswing.

In a recent blog post, the Tezos Foundation announced the release of a faucet for the Tezos mainnet. The idea behind it is to dispense a small portion of XTZ tokens to users for testing and development purposes. The tokens distributed by the Foundation’s faucet have a real value, according to the statement.

“This faucet allows developers and users to request Tezos tokens (tez) to be used on the Tezos main network. This is real (mainnet) tez and has a market value. Please drink responsibly.”

The faucet compensates users with 0.01 XTZ (1.5¢) every 10 seconds. It also prevents individuals from making more than one request as it blocks their IP and wallet addresses for 12 hours before another request can be made.

The Foundation reserves the right to shut down or change the faucet’s parameters in the future and advises developers to not depend on its continued availability.

The release of a faucet for the Tezos mainnet can be seen as a new way to encourage software developers to build their decentralized applications on this network. Although time will tell whether this methodology will work, XTZ is showing several bullish signs.

The TD sequential indicator recently presented a sell signal on XTZ’s 12-hour chart. The bearish formation came in the form of a green nine candlestick that progressed into a red one candle.

Following the sell signal, Tezos plunged over 8 percent. However, the demand for this cryptocurrency increased as its price was dropping, allowing it to bounce off quickly.

If Tezos is indeed bound for a further upward advance, it will first have to break through the significant level of resistance given by the 50 percent Fibonacci retracement level. Closing above this price hurdle would likely trigger an increase in the buying pressure behind this cryptocurrency that allows it to move up to the next levels of resistance around the 61.8 and 78.6 percent Fibonacci retracement level. These price barriers sit at $1.61 and $1.71, respectively.

Nevertheless, a spike in the selling pressure behind XTZ could jeopardize the bullish outlook. If Tezos closes below the 23.6 percent Fibonacci retracement level, it could pull back to $1.24.

The Tezos Foundation is making significant strides to encourage the developers’ community to build their smart contracts and decentralized applications on top of the Tezos blockchain. The recent release of a faucet could bring a new wave of engineers to test their products on this network. The success of the faucet has yet to be seen, but XTZ is presenting different bullish signals that could propel it into higher highs.

Tezos (XTZ) made it back into the top 10 cryptos by market cap; what’s next?