The Fate of Ethereum: ETH Pushes Toward $800 as Regulatory Announcement Looms

An important decision regarding the future of cryptocurrency regulation is set to be discussed on May 7th, as a working group of senior CFTC and SEC officials prepare a meeting that could determine the manner in which digital currencies are classified under securities laws. 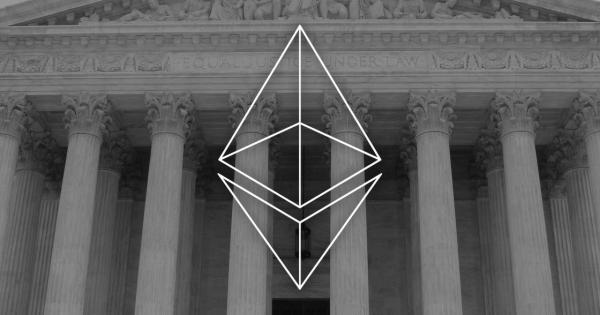 Photo by Claire Anderson on Unsplash

An important decision regarding the future of cryptocurrency regulation is set to be discussed on May 7th, as a working group of senior CFTC and SEC officials prepare a meeting that could determine the manner in which digital currencies are classified under securities laws. Ethereum has taken center stage as the cryptocurrency community awaits the announcement, challenging the $800 barrier as ETH surges ahead of what is predicted to be a positive outcome.

Update: As the SEC/CFTC discussion is a closed-door meeting, it’s unclear whether a regulatory announcement will be made.

The meeting, first reported by the WSJ earlier this month, will see the US Securities and Exchange Commission and the Commodity Futures Trading Commision discuss the regulatory status of both Ethereum and Ripple. Market response to the impending meeting has seen the value of ETH surge, capturing over 14% in gains over the last week.

The regulatory ruling on Ethereum and Ripple classification has remained a divisive topic in the cryptocurrency sector in the lead up to the meeting, with a high-profile crypto trade group recently pressuring the SEC to create a new “safe harbor” classification for the token. In an interview with TheStreet earlier this week, Ethereum co-founder Joseph Lubin stated that the regulatory status of ETH would have a strong impact on future of the Ethereum project, but are not concerned about a potential security classification:

“We spent a tremendous amount of time with lawyers in the U.S. and in other countries, and are extremely comfortable that it is not a security; it never was a security”

CFTC Chairman Christopher Giancarlo, however, disagrees with this appraisal. Speaking at a conference last month, Giancarlo stated that the CFTC was “struggling to find out how we apply an old law to really new and different applications.” SEC Commissioner Michael Piwowar held a similar position, emphasizing that all cryptocurrencies that have been launched via ICO — which includes Ethereum — are, in his opinion, securities:

“Is an ICO a security? … so far, as our chairman has said, everyone that he has looked at, everyone I have seen is a security …  Bitcoin itself is not a security but these customized tokens for these initial coin offerings, most of them are. There is some legitimate stuff going that is on and then there is literally the fraud ones.”

Lubin: Ethereum Categorically “Not a Security”

Ethereum cofounder Joseph Lubin presents a strong argument against the classification of ETH as a security. In order to be classified as a security under US securities law, an asset or offering must pass the Howey test:

Lubin references the Howey test when arguing against security classification:

“I think we already have a regulatory scheme; securities laws in this country govern securities. If you fail the Howey test, you’re not a security. This is a way of accessing a shared compute resource, so I’m not sure Ether needs to be regulated in any way,”

The outcome of Ethereum falling under the regulatory scope of the SEC, however, could prove unlikely given CFTC chairman Christopher Giancarlo’s moderate stance on cryptocurrency regulation. The CFTC chairman suggested a “do no harm” crypto policy in a testimony presented to the Senate Banking Committee earlier this year:

“Virtual currencies mark a paradigm shift in how we think about payments, traditional financial processes, and engaging in economic activity. Ignoring these developments will not make them go away, nor is it a responsible regulatory response.”

Regardless of the outcome of tomorrow’s meeting, a formal position from US regulatory bodies on the classification of cryptocurrencies is set to cement the reality of cryptocurrencies within the current paradigm, paving the way for further adoption.